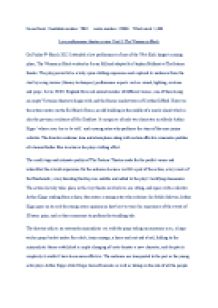 ﻿Susan Keats Candidate number: 7865 centre number: 22066 Word count: 1,406 Live performance theatre review Unit 3: The Woman in Black On Friday 9th March 2012 I attended a live performance of one of the West Ends longest running plays; The Woman in Black written by Susan Hill and adapted by Stephen Mallarat at The fortune theatre. The play proved to be a truly spine chilling experience and captured its audience from the start by using various (literary techniques) performance aspects such as sound, lighting, costume and props. Set in 1920?s England focussed around number of different venues, one of them being an empty Victorian theatre to begin with, and the former market town of Crythin Gifford. However the action centres on the Eel Marsh House; an old building in the middle of a marsh island which is also the previous residence of Mrs Drablow. It comprises of only two characters an elderly Arthur Kipps ?whose story has to be told?, and a young actor who performs the story of the once junior solicitor. The director combines tone and atmosphere along with certain effective cinematic qualities of a horror/thriller film to achieve the plays chilling effect. The small stage and intimate quality of The Fortune Theatre made for the perfect venue and intensified the overall experience for the audience because we felt a part of the action, every creek of the floorboards; every daunting footstep was audible and added to the play?s terrifying demeanour. ...read more.

when a dim, half- light was used whilst the story was being performed, this clearly distinguished between the two as well as giving a disturbing quality. Spot lights were used to isolate certain images projected, important parts of the set and the actors horrified facial expressions at key moments in the play for example when Kipps discovered the writing on the grave stone of Alice Drablow. Whilst Kipps is exploring the mansion at night a single torch offers the only light on stage, the effect of this is to Susan Keats candidate number: 7865 centre number: 22066 increase tension and maximise to shock of any unexpected discovery. The audience engaged with the actor at this point and felt that they were a part of the action as they know no more than what Kipps does. Sound, both diegetic and non-diegetic were also used effectively during the play, for example whilst the actors were in the horse and carriage the noisy sound effects of hoofs and the clatter of the carriage was utilised, movement was linked to this as the actors were jerked around in the carriage especially going over humps, this made the play more realistic and credible as well as offering a certain comedic value, it lightened the mood which is essential in any horror performance, film or theatre as it lures the audience into a false sense of security which then heightens the shock and alarming quality of the moment/scene that follows. ...read more.

The overall thrilling experience of the play was unfortunately tarnished by the frustrating untimely screams of the young school girls seated around me which at times frightened me more than the actual goings on of the performance in front of me. Despite this, for the most part of the play I was either kept on the edge of my seat or had closed eyes in anticipation and dread of what was going to happen. The performance included a range of acting techniques, lighting, and sound effects, the actors themselves David Acton as Arthur Kipps and Den Deery as The Actor are to be credited for their effective use of communication, miming, body language, proxemics and voice modulation. They delivered a truly amazing and credible performance as they captured the essence of the characters. However at times of shocking moments I think they should have waited for the audience to quieten before they started their next line as it was sometimes unclear. It is evident that the director Robin Herford gave much thought to the dynamics of the play and overall thrilling ambience as there was not a moment where the audience were not engaged. The great vocal and spatial awareness of actor David Acton really brought his character to life and captured the audience?s attention. In conclusion, I think the director has successfully brought together all these techniques in order to create a spine chilling, captivating and thrilling production of The Woman in Black. ...read more.