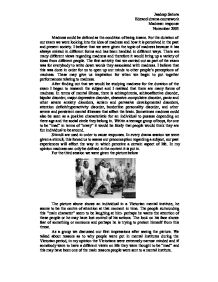 Madness could be defined as the condition of being insane. For the duration of our exam we were looking into the idea of madness and how it is perceived in the past and present society. I believe that we were given the topic of madness because it has always existed in different forms and has been handled in different ways. There are many different views regarding madness and therefore it would bring up a variety of ideas from different people. The first activity that we carried out as part of the exam was for everybody to write down words they associated with madness. I believe that this was done in order for us to open up our minds to other people's perceptions of madness. These may give us inspiration for when we begin to put together performances relating to madness. After finding out that we would be studying madness for the duration of the exam I began to research the subject and I realized that there are many forms of madness. In terms of mental illness, there is schizophrenia, schizoaffective disorder, bipolar disorder, major depressive disorder, obsessive-compulsive disorder, panic and other severe anxiety disorders, autism and pervasive developmental disorders, attention deficit/hyperactivity disorder, borderline personality disorder, and other severe and persistent mental illnesses that affect the brain. Sometimes madness could also be seen as a positive characteristic for an individual to possess depending on there age and the social circle they belong in. ...read more.

1 2 3 4 The main character The performance ended in a freeze frame and then the main character which in this case was the young girl who had fallen pregnant walks across following the arrow demonstrated on the diagram above, she walks to the X and as she passes characters 1, 2, 3 and 4 they will unfreeze, shout out there opinions towards this girls actions, and freeze once again. Overall I have thoroughly enjoyed studying "madness" as a topic for this drama exam, it has allowed me to express my views regarding this subject through the medium of drama. It has also meant that I was able to watch other people perform plays about an issue, which I have always been particularly interested in. For drama, we are required to take part in an exam for six hours. We carried out this exam over a duration of three weeks and we looked into the idea of "madness". We took part in a variety of activities including discussions, performing plays, hot seating and many other things. After looking in depth into 'madness' I have come to realize that there are so many different forms of madness and so many difference ways in which you can express your views towards the idea- it has been interesting to watch performances about such a diverse subject. The first Performance that we did as part of the exam was based around the picture of the young girl in the direction. ...read more.

This helped me to realize that the group you chose to work with was very important and perhaps next time I should think more carefully about the group I chose to work with and whether they will help me to achieve my full potential. Overall, I was disappointed with our performance because as a group we did not work well together in order to perform to the best of our ability. I felt let down by other members in the group and there inability to stay focused whilst practising and performing the play. For this play, I stepped into the role of director and I believe that this was a bad move to take as I was unable to control the group and instruct them properly and next time I will be stepping back and allowing others to direct. After carrying out the exam I have learnt that you should always approach new things with an open mind to new ideas and possibilities and although I was disappointed with the final results of the first performance, I had enjoyed discussing ideas with my group and learning about different ways in which we could approach the task. In addition to this, I also enjoyed carrying out other performances as part of the exam and overall it was a good learning experience. Jasdeep Sahota Edexcel drama coursework Madness: response November 2005 ...read more.