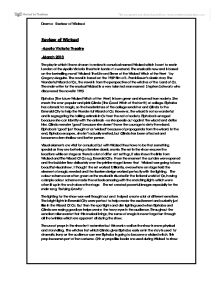 My Review Of Wicked

Review of Wicked -Apollo Victoria Theatre -March 2010 The play in which I have chosen to review is a musical named Wicked which I went to see in London at the Apollo Victoria Theatre in London's westend. The musical is new and is based on the bestselling novel 'Wicked: The Life and Times of the Wicked Witch of the West' by Gregory Maguire. The novel is based on the 1939 film of L. Frank Baum's classic story The Wonderful Wizard of Oz, the novel is from the perspective of the witches of the Land of Oz. The main writer for the musical Wicked is a very talented man named Stephen Schwartz who discovered the novel in 1995 Elphaba (The future Wicked Witch of the West) is born green and shunned from society. She meets the ever-popular and pink Glinda (The Good Witch of the North) at college. Elphaba has a knack for magic, so the headmistress of the college sends her and Glinda to the Emerald City to help the Wonderful Wizard of Oz. ...read more.

But then the spot lights and dim lighting used when Elphaba and Glinda are saying goodbye helps create the teary eyes in the audience. Throughout the emotion rollercoaster that this musical brings, the sense of magic is never forgotten through all the twinkles which are apparent all during the show. The use of props in the show isn't extensive but this works well as the show is more physical and storytelling. The witches hat which Glinda gives Elphaba early on in the story is used for dramatic irony as the audience can see Elphaba is going to become a wicked witch. This prop becomes part of her costume. Other props like books are used during Wicked to show where characters are, books represented school. Glinda's magic wand is obviously used to help build her character and keep the magic element in the show. Costumes in Wicked are very visual as it is a magical story and is based on a quirky tale of the Wizard Of Oz. They are well thought out in order to gain visual perfection but a good meaning also. ...read more.

The key moments in the performance are also the ones which hold the greatest atmosphere and emotion. The opening of the play is key as it is setting the scene and reminiscing, giving the audience a taster to what has happened. Then during the show the key parts have to be the powerful and meaningful songs 'Defying Gravity' and 'For Good'. Defying Gravity is key because it is Elphaba changing and telling everyone she is flying away, it is when she changed to the Wicked Witch. For Good is key as it is whe Glinda and Elphaba the two good friends say goodbye forever. Idina Menzel who played Elphaba had to be my favourite actress in the show, she held great emotion throughout the show and gave the character great characteristics. Idina's strong voice was a quirky twist on a shy character and I loved the way Idina portrayed Elphaba. She contrasted from being shy to very powerful and intelligent. With the art deco glamour of the Emerald City, flying monkeys, levitating witches, brilliant one-liners, a touch of romance and the odd tear jerker. Wicked is sure to bring magic to anyone who watches it. ?? ?? ?? ?? Drama Review of Wicked ...read more.