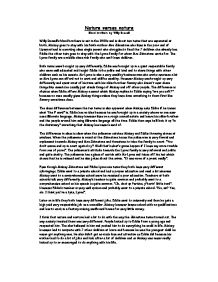 Willy Russell’s blood brothers is set in the 1980s and is about two twins that are separated at birth. Mickey goes to stay with his birth mother Mrs Johnstone who lives in the poor end of Liverpool and is a working class single parent who struggles to feed the 7 children she already has. Eddie the other twin goes to stay with the Lyons family for whom Mrs Johnstone works for. The Lyons family are a middle class rich family who can’t have children.

Both twins were brought up very differently. Eddie was brought up in a quiet respectable family who were well educated and taught Eddie to be polite and kind and to share things with other children such as his sweets. Mr Lyons is also a very wealthy business man who works overseas a lot so Mrs Lyons can afford not to work and still be wealthy. However Mickey was brought up very differently and spent most of his time with his older brother Sammy who doesn't ever share things like sweets he usually just steals things of Mickey and off other people. The difference is obvious when Eddie offers Mickey a sweet which Mickey replies to Eddie saying “are you soft?” because no ones usually gives Mickey things unless they have done something to them first like Sammy sometimes does.

The class difference between the two twins is also apparent when Mickey asks Eddie if he knows what “the F word” is. Eddie has no idea because he was brought up in a society where no one ever uses illiterate language. Mickey however lives on a rough council estate and hears his older brother and the people around him using illiterate language all the time. Eddie then says he’ll look it up “in the dictionary” something that Mickey has never heard of.

The difference in class is clear when the policeman catches Mickey and Eddie throwing stones at windows. When the policeman is round at the Johnstone house the police man is very formal and unpleasant towards Mickey and Mrs Johnstone and threatens to take the family to court. ”You don’t wanna end up in court again do y’? Well that’s what’s gonna happen if I have any more trouble from one of yours”. The policeman’s attitude towards the Lyons family is very informal and polite and quite chatty. The policeman has a glass of scotch with Mr Lyons and takes off his hat which shows that he is relaxed and he also jokes about the crime. “It was more of a prank really”.

Even though Mickey Johnstone and Eddie Lyons are twins they both have very different upbringings. Eddie went to a private school and had a proper education and read a lot whereas Mickey went to a comprehensive school were he received a poor education. Teachers at both schools talk very differently. Mickey’s teacher is quite common and probably went to a comprehensive school so his speech is quite common. “Oh, shut up Perkins, y'borin' little turd”.

However Eddie’s teacher is very well spoken and probably went to a private school. “No, sir? Yes, sir. I think you're a tyke, Lyons”.

Later on in life they both have very different jobs. Eddie went to university and then he gets a high paid very respectable job as a councillor. Mickey however leaves school with no qualifications and has to work in a factory making cardboard boxes for very little money.

I think that nature and nurture had a lot to do with the way the Johnstone twins turned out. The way society treated them was very different. People looked up to Eddie from a young age and respected him. The also believed in him and pushed him to do everything he could in life. Mickey however had to compete with 7 other children at home and because he was the youngest child he never got anything new. He also didn’t get as much love and attention as Eddie did because his mother had to do a lot of jobs and look after a lot of children and so Mickey was never really looked up to or encouraged to do anything with his life.