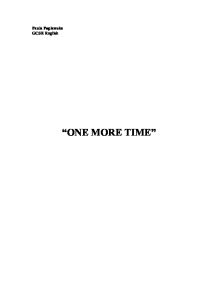 Paula Poplawska GCSE English "ONE MORE TIME" SCENE 1: Girlish looking woman, in her late twenties, a little overweight, lost in thought. She is wearing jeans, a white jumper and trainers. Her dark hair is tied back. Scene is set up in the upper right stage corner. It is an airport arrivals lounge. There is luggage around her. She is nervously lighting a cigarette. Lights are directed towards her, the background is in shadow. How many times can you start again? I haven't got a job, I don't know the language, and what's most important I've never been here before. After two years in the Italian sun, grey and cloudy England will be a big change. At least, that's what I've always heard about the island. Oh! I wish I could call this place home in a few years' time. English people sound alright actually. Not that I have met many of them, but the few in the airplane were really nice to me. Their Italian wasn't as good as mine but certainly better than my English. (Silence. She looks around obviously waiting for someone). I left this life behind me and I am not going to regret it. Not much to miss, except the weather, the sea view from the balcony and the food. There was nothing else to stop me from leaving. ...read more.

We were talking a lot and one night believing he would understand, I told him that I was going to visit Tania. I didn't say it was a one way ticket and that it was really in his hands if I came back or not. He started shouting, "Do you really think that she wants you there? She is just trying to be nice. People have got their own problems." That was so nasty of him. (Sigh). Looking down. But it was scary too. If it was true and he was right it would mean that I hadn't really got anyone. Tania was someone on whom I could always rely. She never let me down. I was ashamed that my side of our friendship was bit darker. I had let her down really badly more than once and we didn't talk for a few months but she always seems to be there when my life is crashing. Anyway, that night Martin took his pillow and slept on the sofa in our living room until the day I left. He didn't say a word to me all that time. It was so hard! I rang Tania the day before to say I would be coming and that I would like to stay for a while if I could. She just said "I'll pick you up at the airport". But she's not here yet. I'm almost twenty nine years old and this is all I have. ...read more.

But at the time Sonia said "You haven't got a ring" and Nick said something like he would make her one out of grass. (Smile) On the last day I looked at Tania and I could see that she wanted to tell me something. So I asked her and she'd say "yes, there is something...", only a minute later she'd say "No". I sat with her by the pool and she kept hiding her hand. I asked her "what is it?" but she seemed to change her mind every second and she said "nothing". I new it is something important and then she showed me. She was wearing a ring on her finger! I didn't know what to say, I was speechless and I cried with her. At our last breakfast I officially announced their engagement. Only then they told us that it had actually happened the evening before yesterday but neither of them knew how to break the news. The day we got back Tania asked Nick to get her a drink and he said "Babe, you even can call me Jafta if you want". The four of us burst out laughing like children. I thought that one day Willie would had give me a ring, but now... Every morning he would tell me "I love you" just so I would know if "something happened" to him.... (Tears flow down her face). I thought he is ridiculous, but ......... He was killed by a car on his way to work. I have to start once more ... ?? ?? ?? ?? 7 ...read more.