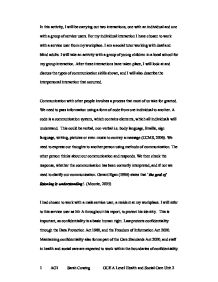 one to one communication interaction

In this activity, I will be carrying out two interactions, one with an individual and one with a group of service users. For my individual interaction I have chosen to work with a service user from my workplace. I am a social tutor working with deaf and blind adults. I will take an activity with a group of young children in a local school for my group interaction. After these interactions have taken place, I will look at and discuss the types of communication skills shown, and I will also describe the interpersonal interaction that occurred. Communication with other people involves a process that most of us take for granted. We need to pass information using a form of code from one individual to another. A code is a communication system, which contains elements, which all individuals will understand. This could be verbal, non-verbal i.e. body language, Braille, sign language, writing, pictures or even music to convey a message (CCMS, 2006). We need to express our thoughts to another person using methods of communication. The other person thinks about our communication and responds. We then check the response, whether the communication has been correctly interpreted, and if not we need to clarify our communication. Gerard Egan (1986) states that 'the goal of listening is understanding'. (Moonie, 2005) I had chosen to work with a male service user, a resident at my workplace. I will refer to this service user as Mr A throughout this report, to protect his identity. This is important, as confidentiality is a basic human right. Law protects confidentiality through the Data Protection Act 1988, and the Freedom of Information Act 2000. ...read more.

It is important to offer choice to Mr A as this empowers him further. Mr A has muscle wastage in his right arm and has very little use of it. He eats well out of a specially designed bowl and a special spoon using his left hand. Mr A is unable to put cereal or milk into the bowl himself, or to spread toast or make drinks. He requires someone to do this for him. I asked Mr A what he would like for breakfast. Mr A responded 'not much'. This is a typical response so I asked whether he would like Weetabix or Shreddies. This again ensured Mr A had a choice. Mr A answered 'Weetabix'. Mr A will most often copy the last thing a person says, so I encourage his responses by saying the cereal he has every morning first. After Mr A had finished his Weetabix I asked him if he would like any toast and he said 'yeah'. I then asked Mr A if he would like marmite on his toast. Mr A responded 'didn't say that' and shuffled around in his chair, indicating to me that he was not very happy. His body language became defensive as he turned away from me. With my voice at a calm slow pitch I asked Mr A if he would like jam on his toast (which he always has) and Mr A said 'yeah'. I used this tone of voice to calm the situation. Mr A then relaxed and turned back towards the sound of my voice. The questions used at this point were closed because I know that Mr A has little expressive language so at times this is unavoidable. ...read more.

Empathy is "a person's awareness of the emotional state of another person and their ability to share an experience with them" (Richards, 2003, p.121). I was aware of Mr A's emotional state and my ability to build an understanding. On two occasions I touched Mr A's arm briefly to show friendliness and compassion. I feel Mr A was very responsive to our interaction and I was very happy with how it went. I think that given Mr A's verbal disabilities I engaged him in a good conversation, listened well and used correct techniques to aid this. I also provided him with the correct amount of support during his breakfast. The other staff member present in the room was my deputy manager. I asked her to complete a witness statement for my to say I had completed an interaction with Mr A. She agreed to this. I also asked her for feedback on the techniques I had used, and how she felt the interaction went. She told me that I had engaged Mr A well. When Mr A is listening to the radio he doesn't always want to talk. He responded that he was happy to talk to me with the radio turned down low. She said Mr A appeared very relaxed and seemed to enjoy talking to me. He was also happy to go to the dining table and let me assist him in getting some breakfast. When asked, Mr A said he had enjoyed talking to me. He also appeared to be happy with the support I offered him when getting his breakfast. As he can become angry quite easily when offered too much support, I also felt this was good feedback. 1 AO1 Sarah Cowing GCE A Level Health and Social Care Unit 2 ...read more.