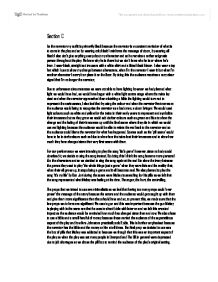 Our staging of Blood Brothers. The props that we intend to use are minimalistic as we feel that having too many props could over power the message of the story because the actors and the audience would get caught up with them

Section C As the narrator my outfit is primarily black because the narrator is a constant reminder of what is to come in the play and so by wearing only black I reinforce the message of doom, by wearing all black I also don't give anything away about my character and so he remains a rather enigmatic person throughout the play. We know why he is there but we don't know who he is or where he's from. I wear black, straight cut trousers with a white shirt and a fitted black blazer. I also wear a top hat which I use to show my change between characters, when I'm the narrator I wear it but when I'm another character I carry it or place it on the floor. By doing this the audience receives a very clear signal that I'm no longer the narrator, Due to unforeseen circumstances we were not able to have lighting however we had planned what light we would have had, we would have begun ...read more.

We also planned to play the song 'it's my life' by Bon Jovi during the scene were Mickey is searching for his pills as we felt that the song represented what Mickey was feeling at the time. The anger, the hurt, the controlling. The props that we intend to use are minimalistic as we feel that having too many props could 'over power' the message of the story because the actors and the audience would get caught up with them and give them more significance than they should have and so, to prevent this, we made sure that the few props we do have are significant. We used a gun and this was important because the gun Mickey is playing with is the same one that he uses to shoot Eddie with later on and we felt this created impact as the audience would be reminded how much has changed since then and now. ...read more.

As children they stand closely together and are constantly touching each other however when they become teenagers we can see in the 'school scene' and the 'cinema scene' Linda's attempts to be close to Mickey whilst Mickey is always moving away from her, signifying to the audience that he is uncomfortable with Linda's advances as he is always trying to put distance between them. Another example is the scene between Miss Johnstone and Mrs Lyons where Mrs Lyons stands very closely to Miss Johnstone as she tries to persuade her to giver up her baby which shows that she is trying to be close to her emotionally and yet when she takes the baby she immediately puts distance between them as she feels that that is the best way to protect the secret. She goes about thus by putting physical distance between them and backing away whenever Miss Johnstone approaches her and then even more physical distance by first dismissing her from her jobs and then moving to the countryside. All to keep her away from Eddie. ...read more.