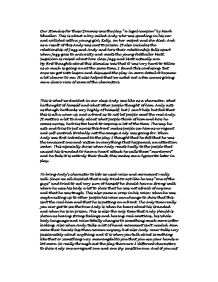 Our stimulus for these Dramas was the play &quot;a legal weapon&quot; by Mark Wheeller.

Our stimulus for these Dramas was the play "a legal weapon" by Mark Wheeller. This is about a boy called Andy who was speeding in his car and collided with a young girl, Kelly, on her moped and she died. And as a result of this Andy was sent to prison. It also includes the relationship of Jazz and Andy and how their relationship falls apart when Jazz goes to university and meets the young footballer Matt. Suspicion is raised about how close Jazz and Matt actually are. My first thoughts about this stimulus was that it was very hard to follow as so much is going on at the same time, I found this confusing. But once we got into lesson and discussed the play in more detail it became a lot clearer to me. It also helped that we acted out a few scenes giving me a clears view of some of the characters. This is what we decided in our class Andy was like as a character, what he thought of himself and what other people thought of him. Andy acts as though he thinks very highly of himself, but I can't help but feel that this is all a cover up and a front as to not let people meet the real Andy. It matters a lot to Andy about what people think of him and how he comes across, he tries too hard to impress a lot of the time. The way he acts and tries to put across this front makes people see him as arrogant and self-centred. Probably not the image Andy was going for. When Andy was first introduced to the play I thought that he felt that he was the innocent one and victim in everything that happened, an attention seeker. This especially shows when Andy reacts badly to the people that caused his Grandad to have a heart attack he calls them "murderers" and he feels it is entirely their fault, this makes me a hypocrite later in play. ...read more.

And this was to show Kelly's death. I think that this was a good idea because that way we could show pain in a new and different way. My group chose not to use any props for this, as it would make it a bit more complicated. But after watching the other groups dramas I think that we should have. A group that I thought did very well was Claire's group. They used pieces of shredded material on the end of wooden sticks. There was a person either side of Claire pushing her around with these sticks and as she fell to the floor she grabbed them and fell to the floor with them, so they also acted as blood. They also used hacked up pieces of blue material for the boiling water with sugar in the very last scene. I didn't think that this worked as well because I think that the water would have been better mimed as the material showed not enough pain it looked to soft and I don't think that it worked as well in a scene like that one. We had to mime a lot since a lot of the scenes included a car. It was the first time that our group had had to mime so much but I think that we all did it really well. When I think it was most effective when people acted out being Andy in the car. I think that this worked well because of how people moved about. Sam Catling was very good at this, he moved about really well he didn't look like he felt stupid, he looked relaxed and the movements he made weren't too unnatural and not to over acted. I think this worked well since everybody took him seriously and we all had a good mental image of him in a car, driving. We did use both climax and anti climax through out these sessions. ...read more.

This is when we incorporated the script Kelly yelling to her father, "I'll be back as soon as I can just after 5 I guess." We then ended with Kelly lying on the floor again. Just how we started. I think that this was the most effective because this was when we got to make up what was going on. Since we hadn't been told anything about Kelly about what she liked, whom she lived with, what sort of personality she had he got to use our imaginations a lot more. And I enjoy doing this more than script work since there are not so many boundaries as there was when we worked from a script. The response that we received from this piece was good. If I were to improve it I would have added maybe more memories to show more of a combination. I think that this was a really good assessment period since there was a lot of good drama's produced. I felt that I have learned a lot through doing these dramas. Since this was only the second time we had worked from a script I felt that it worked really well. We also got to explore different areas of drama. Where as usual we just show what is going on in a scene and do everything very straight forward we got to experiment with different ways of showing an incident, for example Kelly's death, this proved to be a lot more exciting and I thing that it actually made scene look a lot more dramatic and added more tension, it was a lot more interesting to watch also. This play is also really good because there is a really strong message put across about speeding. Something a lot of children and young adults don't always consider when they are driving. This play has shown us what awful consequences can come from speeding. Even if its just 50 miles an hour. And I will think twice before speeding when I drive. ...read more.