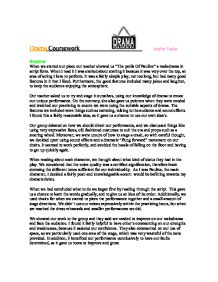 &quot;Perils of Pauline&quot;- Analysis. When we started our piece our teacher showed us The perils Of Pauline a melodrama in script form. When I read it I was excited about starting it because it was very over the top, an area of acting I love to pe

Drama Coursework Sophie Taylor Response When we started our piece our teacher showed us "The perils Of Pauline" a melodrama in script form. When I read it I was excited about starting it because it was very over the top, an area of acting I love to perform. It was a fairly simple play, not too long, but had many good features in it that I liked. Furthermore, the good features included many jokes and laughter, to keep the audience enjoying the atmosphere. Our teacher asked us to try and stage it ourselves, using our knowledge of drama to create our unique performance. On the contrary, she also gave us pointers when they were needed and watched our practicing to ensure we were using the suitable aspects of drama. The features we included were things such as narrating, talking to the audience and sound effects. I found this a fairly reasonable idea, as it gave us a chance to use our own idea's. Our group debated on how we should direct our performance, and we discussed things like using very expressive faces, old fashioned costumes to suit the era and props such as a steering wheel. ...read more.

It was moderately simple to do as the dialogue also established when a new scene was about to begin. Furthermore, we needed to create better stage directions if we wished to conceive a performance that was of a high standard and flowed well. I found that the more time we spent on getting the stage directions correct, the better it became. In our group we discussed focus, and then decided that if we wished to keep the characters personality well, we needed full concentration. Moreover, this would keep us from laughing out of term and ruining the play. We also found that in one scene, split-stage was in need of careful dialogue placement, so that when one person was talking, the companions on stage didn't disturb the focus with wild movement or sound. This boosted the interest within the audience, as it kept their focal point where we wanted it. The more troublesome aspect of the assignment was when we disagreed on who should act who. This caused arguments because there were certain characters two people wanted to be. ...read more.

"[face Algy, put hand on hip whilst tapping foot, expectant expression]. Evaluation Our teacher asked us to show our work to the group and it went badly because our focus wasn't satisfactory which caused laughing out of term and forgetting dialogue timing. On the other hand, we had good staging and melodrama skills. Our audience said things like good use of melodrama, but face the audience and speak clearer. This helped the performance exceed further than we anticipated because we concentrated on those aspects and kept ourselves focused. I found feedback was the biggest aid to our performance because we had other peoples evaluation from a different perspective. I felt that overall our play was reasonably good. My own performance was fairly satisfactory to the requirements. If we performed our play, we would want our audience to understand that it was a melodrama and that we weren't serious characters. I think that maybe some people didn't get at first that we were supposed to be over the top, but they realised quickly. We decided to use our stimulus by the basis of melodrama. We thought that this would be a pleasurable way to perform it for both the audience and actors. ...read more.