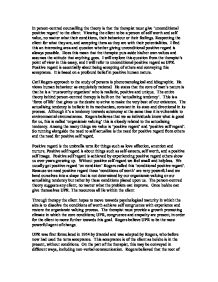 In person-centred counselling the theory is that the therapist must give 'unconditional positive regard' to the client. Viewing the client to be a person of self worth and self value, no matter what their conditions, their behaviour or their feelings. Respecting the client for what they are, and accepting them as they are with their potentialities. I find this an interesting area and question whether giving unconditional positive regard is always possible. Does this mean that the therapist puts aside his/her own values and assumes the attitude that anything goes. I will explore this question from the therapist's point of view in this essay, and I will refer to unconditional positive regard as UPR. Positive regard is essentially about being accepting of others and conveying this acceptance. It is based on a profound belief in positive human nature. Carl Rogers approach to the study of persons is phenomenological and idiographic. He views human behaviour as exquisitely rational. He states that the core of man's nature is that he is a 'trustworthy organism' who is realistic, positive and unique. The entire theory behind person-centred therapy is built on the 'actualizing tendency'. This is a 'force of life' that gives us the desire to strive to make the very best of our existence. The actualising tendency is holistic in its mechanism, constant in its state and directional in its process. Although it's a tendency towards autonomy at the same time it is vulnerable to environmental circumstances. Rogers believes that we as individuals know what is good for us, this is called 'organismic valuing' this is closely related to the actualising tendency. ...read more.

Congruence is the key to self awareness. It is only when one is aware of the 'real self' that they can work on accepting the real self. The individual is congruent when the self concept is in agreement with inherent potentialities and this leads to openness to experience and a fully functioning person. To be consistent with the basic principles, training, or education of the psychotherapists in the person-centred approach is rooted in the development of the personality of the therapist, rather than in the training and practising of skills. It is rather like a process of becoming. So if we assume that the therapist is self accepting and accepting of others, is it really possible for him/her to give UPR to the client always? What about congruence, this awareness the therapist has of his/her 'real self', values and beliefs, where does this fit in or not fit in? Rogers said that there are some necessary conditions for therapeutic change. These conditions are: psychological contact between the client and therapist, the client being incongruent in the relationship, the therapist being congruent in the relationship, the therapist experiencing UPR towards the client, the therapists empathic understanding of the inner world of the client and his/her communication of it, the clients experience of the positive regard and the empathy at least to a minimal degree. The three core conditions are, as said by Rogers; congruence, UPR and empathy. Congruence is the therapist being what he/she is, when in the relationship with the client. They must be genuine without 'front' or 'fa�ade', openly being the feelings and attitudes which at that moment are flowing through them. ...read more.

Rogers recognised that the therapist is only human, and often enough a bit more 'human' than most. He said that the therapist must show UPR in the therapeutic relationship. In other words, when the therapist leaves the office, he can be as 'human' as anybody. So I could conclude that it is not always possible to hold a client in UPR and the therapist does not have to put aside their own values and beliefs and assumes the attitude that anything goes, as this would be incongruent. Rather the therapist needs to be aware that these values and beliefs to him/her and not to the client. My own difficulty to adopt an attitude of URP while being honest about my own values and so on, and my 'feelings of unease' while working with certain attitudes and beliefs, possibly arise from some very deep-rooted issues within myself. So first I need to explore these issues and accept them as my own. I need to feel positive regard for myself, in order to work effectively with this attitude. Rogers is reputed to have been a very gifted clinician. However it is difficult to know whether the therapist that follows his model is truly practising Rogerian therapy as it was intended the concepts of UPR, congruence and empathy allow too much room for interpretation, although Rogers likely possessed these qualities. Rogers himself pointed out that every theory including his own contains an unknown amount of errors and mistaken interference. He believed that a theory should serve as a stimulus to further creative thinking. And his theory appears to have succeeded in this intention. Roger's theory has very strong heuristic value and continues to generate debate and interest around areas such as UPR. ...read more.