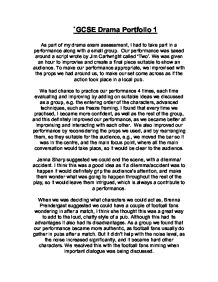 `GCSE Drama Portfolio 1 As part of my drama exam assessment, I had to take part in a performance along with a small group. Our performance was based around a script wrote by Jim Cartwright called 'Two'. We was given an hour to improvise and create a final piece suitable to show an audience. To make our performance appropriate, we improvised with the props we had around us, to make our set come across as if the action took place in a local pub. We had chance to practice our performance 4 times, each time evaluating and improving by adding on suitable ideas we discussed as a group, e.g. the entering order of the characters, advanced techniques, such as freeze framing. I found that every time we practised, I became more confident, as well as the rest of the group, and this definitely improved our performance, as we became better at improvising and interacting with each other. ...read more.

If I remember correctly, every character though tracked just before they got up to dance. My characters thought track was 'Oh God, what am I doing sat with this fella' ? He looks broke. But then again he could have a million dollars tucked away somewhere, for me! Might 'swell give it a try.' Mime originates from ancient Greece. Mime is covered by working in silence, or with few sounds or words, to show activities. Traditionally a mime artist is portrayed as a sad character, which is either trying to climb a wall to brake free, or run from a chase, these performances are usually very short and simple. Mime artists are usually dressed in comical outfits, and have a white face painted on along with an upside down smile (Frown), this is a fairly obvious way to show a characters emotion. Nowadays, mime artists have a far by more complex role to play. Furthermore, they often can be used as serious characters. ...read more.

I chose to play this role, as I thought it would liven up the atmosphere of the pub, and also add to the chatty style, which is quite authentic, as a pub is a quite laid back informal place. In the end performance, my character entered with her husband, and seconds later, unsurprisingly quickly wondered of to make conversation with other people in the pub. I thought this was a good way to make the performance seem more authentic, as usually in pubs, everyone interacts with each other. Furthermore, again I thought this would add to the atmosphere. If I was going to where a costume to represent my character it would most likely be a low cut tight black top, red mini skirt with a pair of shiny black heels, finalised with an expensive handbag, and necklace, to show my character had expensive taste. Also my character would be wearing a wedding ring, which would symbolise she was married. This outfit would suggest to the audience that I was playing a very flirty character. This is a bird's eye view diagram of the set we all agreed on finally: ...read more.