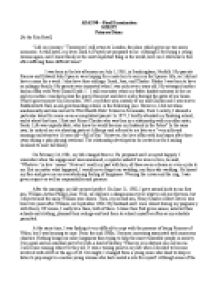 ﻿ADA2O0---Final Examination SCRIPT Princess Diana [At the Ritz Hotel] ?Life is a journey.? Tomorrow I will return to London, the place which gives me too many memories. At this hotel, my lover Dodi Al Fayed just proposed to me. Although I feel being a young woman again, and I know family is the most important thing in the world, how can I still believe this after suffering those difficult times? I was born in the late afternoon on July 1, 1961, in Sandringham, Norfolk. My parents Frances and Edward John Spencer were hoping for a male heir to carry on the Spencer title, so I did not have a name for a week. I also have three siblings: Sarah, Jane, and Charles. Maybe I was born to have an unhappy family. My parents were separated when I was only seven years old. My estranged mother had an affair with Peter Shand Kydd. I?I still remember when my father loaded suitcases in the car and my mother crunched across the gravel forecourt and drove away through the gates of our house. What a great sorrow! On December, 1967, my father won custody of me and Charles and I was sent to Riddlesworth Hall, an all-girls boarding school, in the following year. ...read more.

From the mid-1980s, I became increasing associated with numerous charities. Nothing brings me more happiness than trying to help the most vulnerable people in society. It is a goal and an essential part of my life-a kind of destiny. Whoever is in distress can call on me. I will come running wherever they are. It was a turning point in my life when I decided to become involved with AIDS at the age of 26. Overnight, I changed from a young mum who liked to shop or listen to pop songs to a mature young woman who had created a role for myself. Although some of the Queen?s advisers totally opposed me becoming involved with AIDS, a taboo subject never discussed in polite company or at British upper-class dinner parties, I was determined to help. Later on, I began helping more charities such as Birthright and Turing Point. I concern about people who are in need, and helping charities is the best way to help them. I will never regret doing so. (Never). I have suffered from chronic bulimia for years, and it only became worse by my depression and unhappy married life. In the past, I always hoped we could be better; however, there was something I could not change. ...read more.

I continued focusing on charities and launched my campaign against landmines in 1997. I worked hard, but I was also a woman with erotic needs, with an inclination for love and passion. I longed for a male shoulder to lean on. For me getting acquainted with men was always a great problem. Yet in that summer, I tossed my cares aside and once again fell head over heels in love. He is Dodi Al-Fayed. He is 41 years old and, like me, divorced. We have many similarities: both stemmed from broken homes, both had been left by our mothers as children and grew up with our fathers. He was so different from Charles. He fulfilled my every wish, showered me with compliments and little gifts. Finally, I felt like a woman again, loved, honoured, and respected. He conquered my heart very gently without haste. Life appeared to be suddenly so carefree and joyful. So we spent a few days during the holiday and stayed one night at this hotel. Sometimes recalling my past is not a good thing, but it does help me cherish my life now. True. I want this man. But I am not sure if I can have a happy marriage this time. Things happened in the past influenced me so much. I have to think carefully, I know it. Anyways, I want to hug my children in my arms and pass the last days of my holiday with them together tomorrow. It?s time to leave now. ...read more.