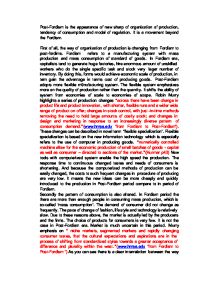 Post-Fordism is the appearance of new sharp of organization of production, tendency of consumption and modal of regulation. It is a movement beyond the Fordism.

Post-Fordism is the appearance of new sharp of organization of production, tendency of consumption and modal of regulation. It is a movement beyond the Fordism. First of all, the way of organization of production is changing from Fordism to post-fordims. Fordism refers to a manufacturing system with mass production and mass consumption of standard of goods. In Fordism era, capitalists tend to generate huge factories, hire enormous amount of unskilled workers who do the single specific task and stock very lager number of inventory. By doing this, forms would achieve economic scale of production, in tern gain the advantage in terms cost of producing goods. ...read more.

These changes can be described in novel term 'flexible specialization'. Flexible specialization is based on the new information technology which is especially refers to the use of computer in producing goods. ''numerically controlled machine allow for the economic production of small batches of goods - capital as well as consumer - directed to sections of the market.''(Kurmar p43) New tools with computerized system enable the high speed the production. The response time to continuous changed tastes and needs of consumers is shortening. And because the computerized methods of production can be easily changed, the costs to such frequent changes in procedure of producing are very low. ...read more.

The pace of change of fashion, life style and technology is relatively slow. Due to these reasons above, the market is actually led by the producers and the firms. The choice of products for consumers is very few. It is not the case in Post-Fordism era. Market is much uncertain in this period. Murry emphasis on '' niche markets, segmented markets and rapidly changing consumer tastes, that the cultural expectations and aspirations are in the process of shifting from standardized styles towards a greater acceptance of difference and plurality within the west.''(www.hmse.edu 'from Fordism to Post-Fordism ') As you can see there is a clear interrelation between the way of production and the consumption and they are continuously pushing each other.smer the style, colour which is so-callsuch frequent changes in proceture s in design an ...read more.