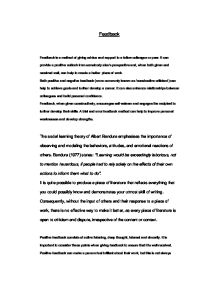 Feedback is a method of giving advice and support to a fellow colleague or peer. It can provide a positive outlook from somebody else’s perspective and, when both given and received well, can help to create a better  piece of work.

Both positive and negative feedback (more commonly known as ‘constructive criticism’) can help to achieve goals and further develop a career. It can also enhance relationships between colleagues and build personal confidence.

Feedback, when given constructively, encourages self-esteem and engages the recipient to further develop their skills. A trial and error feedback method can help to improve personal weaknesses and develop strengths.

The social learning theory of Albert Bandura emphasises the importance of observing and modeling the behaviors, attitudes, and emotional reactions of others. Bandura (1977) states: "Learning would be exceedingly laborious, not to mention hazardous, if people had to rely solely on the effects of their own actions to inform them what to do”.

It is quite possible to produce a piece of literature that reflects everything that you could possibly know and demonstrates your utmost skill of writing. Consequently, without the input of others and their response to a piece of work, there is no effective way to make it better, as every piece of literature is open to criticism and dispute, irrespective of the content or context.

Positive feedback consists of active listening, deep thought, interest and sincerity. It is important to consider these points when giving feedback to ensure that it is well-received. Positive feedback can make a person feel brilliant about their work, but this is not always most important. The quality of the work is priority and the feedback should be given according to this, in a constructive way, so that the person fully understands the feedback that you are giving.

Negative feedback should also be given constructively and should not be considered simply as an opportunity to put-down others. It is not a personal assessment, but is meant to help improve a piece of work or a person’s key skills.

If not given constructively, a person’s self-esteem can be lowered, which can lead to a lack of motivation. Thus, a piece of work is produced that is no better than the original.

Whether it is positive or negative, if bad feedback is given, a person may misunderstand and go on to reproduce a less-effective piece of work because they don’t know how to better it. The content of the feedback is just as important as the way in which it is given i.e. maintaining eye-contact and actively listening.

Colin Rose developed many of the Accelerated Learning techniques and pioneered how to apply the method for students, teachers and language learners. However, the method is certainly not the work of just one person. Dozens of universities, research psychologists and professional educators have contributed to produce this unique way of learning and presenting new information. What Colin Rose has done is to synthesise the work of over 100 key educational researchers and create a simple model of learning that makes effective learning a skill within the reach of everyone. He has produced a short questionnaire to help an individual learner discover what exactly is their learning style.

Kolb's learning theory sets out four distinct learning styles (or preferences), which are based on a four-stage learning cycle. It offers both a way to understand individual people's different learning styles, and also an explanation of a cycle of experiential learning that applies to us all. Kolb says that, ideally (and by inference not always), this process represents a learning cycle or spiral where the learner covers all four aspects, i.e. a cycle of experiencing, reflecting, thinking, and acting (P120).

Immediate or concrete experiences lead to observations and reflections. These reflections are then absorbed and translated into abstract concepts with implications for action, which the person can actively test and experiment with, which in turn enable the creation of new experiences.

Honey and Mumford have since produced their own interpretation of this theory and refer to the terms activist, reflector, theorist and pragmatist when describing the four learning styles.

Different types of learner give and receive feedback differently. For example, a theorist would appreciate an appraisal-type feedback session, possibly on a one-to-one basis. They would benefit from a deep analysis of their work and appreciate comments on particular parts of the piece. When highlighting the positive steps towards making the work better, they would rather have a list of points to consider when reproducing their work. A theorist enjoys trying to stretch the quality of their work further by putting pen to paper, as opposed to actively rehearsing it over and over again, much like an activist or pragmatist would prefer. These are different ways in which a learner may react (actively) to feedback given regarding their work. It is just as important to know how to give appropriate and effective feedback as it is to be able to receive it adequately.

Positive feedback is too important to let slide, so it is imperative to ‘seize the moment’ and say something right away, or else the chance could be missed. It is also a boost for the person’s self-esteem to make it public. While negative feedback should be given privately, positive feedback should be given publicly. Be specific. Don't just say “well-done”, leaving the gesture empty and without meaning. Make specific the points that were useful to you and explain to the person what exactly they have done to receive such a good response.

A good piece of work warrants positive feedback, however, it is not always necessary to assemble the entire building every time you are going to give it out. It is important to be able to know how and when such a ceremony is appropriate. With this in mind, it is also useful to consider the receiver. Different people respond differently to recognition and positive feedback.

Consider the receiver. It is important to consider the feeling of the person receiving the recognition. Different people respond differently to recognition and positive feedback and the worst thing that could happen is the receiver could take offense. Sincerity is a well-respected quality to bestow, so being honest and sincere towards others can be very rewarding. It is unnecessary to congratulate somebody for simply showing up on time or even just doing their job. Be sincere and really mean it when giving positive feedback.

There is a lot more to knowing how to give and receive positive feedback than most might think. However, There is also sometimes a need for negative feedback, or constructive criticism, as it is more harmlessly known.

Firstly, it is not good to critique someone else's actions when you are angry or upset. You are likely to say something you don't really mean or to react poorly to something that is said to you. So, get all emotions under control. No one wants to receive negative feedback in front of others, so find a private place. Sometimes it is unavoidable, but that should be a last resort. Take a meeting in your office, call the person into a vacant conference room, step into the lunch room if it is vacant and focus on their actions, not the person. An immediate barrier can be created when you criticise a person. Focus, instead, on when you want to change and focus on their performance. It does no good to tell someone “you have a bad attitude”, so it’s important to be specific. A skilled and well-prepared individual can identify specific actions the person took or specific things they said if you want them to understand. These point are all orientated around the personality of the recipient of the feedback.

Secondly, be timely. Negative feedback should be given as soon as possible after the event. In a place of work, If an employee is being rude to a customer, don't wait until their annual performance review to tell them. How many other customers will they have angered in the meantime? Call them into your office right away. Be calm, don't yell and scream. The other person will become defensive and won't hear what you are trying to tell them. This can also affect the relationship between you and the receiver of the feedback.

Although it is known as negative feedback, it is probably more appropriate to think of it as constructive criticism and, when giving it, to define positive steps towards future performance. If there are specific things that a person needs to start doing or needs to stop doing, be sure that they are clearly identified. This will result in a better performance next time.

Overall, the need for both positive and negative feedback is very important in the process of producing a better piece of work. It is highly regarded to ask for feedback when in doubt as much as it is to give feedback when it is necessary. The balance between both can encourage better performance and motivates people to reach their goals.