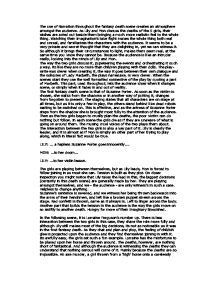 Response 3: how does the use of naration in the fantasy death scene create an atmostphere amoungst the audience in 'Living with Lady Macbeth'

The use of Narration throughout the fantasy death scene creates an atmosphere amongst the audience. As Lily and Mon discuss the deaths of the 5 girls, their wishes are acted out beside them bringing a much more realistic feel to the whole thing. Watching their imagination's take flight makes the whole thing both real and unreal, and familiarizes the characters with the audience. It seems to be a very private and secret thought that they are delighting in, yet we can witness it. So although it brings their circumstances to light, makes them seem real, at the same time you know they cannot be. Because the audience is like an intruder really, looking into the minds of Lily and Mon. The way the two girls discuss it, pupeteering the events and orchestrating it such a way, its like they are no more than children playing with their dolls. The play-write was clever when creating it, the way it goes between their own dialogue and the soliquies of Lady Macbeth, the plays namesake, is very clever. When the scenes start they use the well formatted connective of the play by quoting a part of Macbeth. This part, used throughout, lets the audience know when it changes scene, or simply when it fades in and out of reality. The first fantasy death scene is that of Suzanne Porter. As soon as the victim is chosen, she walks from the shadows or in another way of putting it, changes from forgotten to present. ...read more.

As they chat and plan and ploy, the feeling of childish glee is projected upon the audience and they find themselves joining in with it. Its awfully easy, the girls set such a fun example. Lorraine has the misfortune to be placed upon her horse and thrown around. The deaths, however, are nothing short of fantastical. And although the audience is witnessing the deaths they can understand that nothing serious will come of it. Mainly because the deaths are so impossible. An axe murder, a girl thrown from a 'high' horse onto a carelessly placed spike, a shark attack. Are these really believable methods of murder? Hardly. The fact they are so fantastical keeps them in the unreal state of things, and does not threaten the reality. Red Confetti. Another corpse is strewn across the stage and left abruptly for the next victim. In the third fantasy death scene, we witness the girls scornfully playing on the third girls family circumstance and behavior. They plan to kill girl number three, Caroline Pritchett, in a freak car accident. Before each scene, the girls seem to set it all in place, planning this one going this way and similar. But also in each case the time the two discuss and plan seems to get smaller. There isn't too great a need for a narrative voice in this one, for the projected personality and behavior of the girl explains it all. ...read more.

As Monica and Lily speak these lines, however, the audience cannot help but find it just a bit creepy. Its as if its something that Lily has thought about a thousand times before, and the girls themselves seem to relish in their destruction of such a rival. Monica and she seem to of reached their secret, nasty, magnificent peaks as they kill Stephanie. Shark attack, shown beautifully as they fling another body across the stage. At the end of these five deaths, the girls stand together and look back across the carnage. Where before it has seemed a little less real by the swift habit they use to move from one death to another, this time they look back, at the bodies left about with their last celebratory confetti thrown. It is then Lily speaks lines straight from Lady Mac again, and this final kind of monologue is excruciatingly expressive to the audience. And again like so many other times, Mon is only too willing to follow. LILY: 'I am one my liege, Whom the vile blows and buffets of the world Have so incensed, that I am reckless what I do, to spite the world.' MON: Me too, Lil. This is the finality of the scene and it also leads into the next. Because the clever mixing habit, the quotes of Macbeth that keep this witty play together, not only Finnish's one but starts the next. And no scene, similar to no play, no story even, would be complete without the beggining, the middle and the end ...read more.