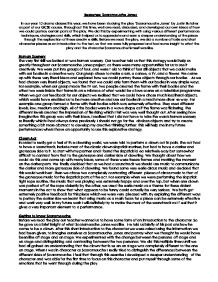 Response: Scaramouche Jones In our year 10 drama classes this year, we have been studying the play 'Scaramouche Jones' by Justin Butcher as part of our GCSE course. Throughout this time, we have read, discussed, and developed our own ideas of how we could portray certain parts of the play. We did this by experimenting with using various different performance techniques, strategies and skills, which helped us to appreciate and earn a deeper understanding of the piece through the exploration of these creative skills. Before we read the play, we did a number of tasks and short character pieces as an introduction to the text, so that we were fully prepared and had some insight to what the play and the character Scaramouche himself was like. Human Scenery The very first skill we looked at was human scenery. Our teacher told us that this strategy would help us greatly throughout our Scaramouche Jones project, as there were many opportunities for us to use it creatively. We were put into groups of four, and were told to think of four still objects that we could make with our bodies in a creative way. Our group chose to make a sun, a canoe, a TV, and a flower. ...read more.

We finally decided that as we had a soundtrack we should use music to communicate the darker and more grotesque side of clowning. We found some very eerie circus music and decided that this would work best. Then we chose two completely contrasting different pieces of circus music to that of the grotesque music for the slapstick parts of the act. For example when we were performing the slapstick tight rope routine, the music that was playing was extremely happy and over the top, but when one clown was pushed off of the rope violently by the other, we used the eerie music as a theme for these violent moments in the act to show that what appears to be funny could actually be very serious. We both got extremely positive feedback for this piece which we were very pleased with. By exploring the different ways to portray the darker side we learnt that using music as a main focus for a piece can be extremely effective and work very well. In my future work I will definitely try to make the most of the soundtrack as I feel that it gives a very important element to a performance. Getting to know Scaramouche Before we read the play our teacher wanted us to have some form of an introduction to the character. ...read more.

We also showed the contractions of the mother's muscles by linking arms in a tight circle and moving in an inward outward motion. We then thought about how we could show the setting of the scene, and the dreadful conditions Scaramouche was born into. We came up with the idea that because the mother had no medical attention with her, that Scaramouche would have no care when he entered the world and would probably be hurt when I came out. We showed this by falling to the floor rapidly and thudding our fists against the floor as if the baby Scaramouche was falling from his mother's womb which would have been a place of tranquillity and coming suddenly into this harsh and dark world that he had no place in. These were the exercises that I thought helped me to really think about the play and the characters and the ways in which I could bring the story to life. We did many more exercises that also helped, but these were either my strongest, or the ones that if I did not do so well, helped me to realise what I could have done better. By using the different explorative strategies I gained a deeper understanding of the play and discovered how I could use these in my final 10 minute extract performance of Scaramouche Jones. ...read more.