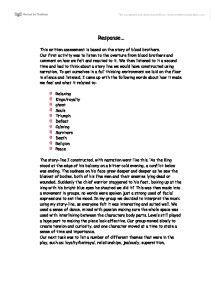 Response This written assessment is based on the story of blood brothers.

Response... This written assessment is based on the story of blood brothers. Our first activity was to listen to the overture from blood brothers and comment on how we felt and reacted to it. We then listened to it a second time and had to think about a story line we would have constructed using narration. To get ourselves in a full thinking environment we laid on the floor in silence and listened, I came up with the following words about how it made me feel and what it related to: * Relaxing * Kings/royalty * ghost * Souls * Triumph * Defeat * Calming * Survivors * Death * Religion * Peace The story-line I constructed, with narration went like this. 'As the King stood at the edge of his balcony on a bitter cold evening, a conflict below was ending. The sadness on his face grew deeper and deeper as he saw the blanket of bodies, both of his fine men and their enemies lying dead or wounded. ...read more.

Next was betrayal/loyalty as it works as opposites in the story as one character is being loyal another is betraying them. I put relationships as my third point, it seems an ironic thing as their mothers don't want them to be friends but they want to be. When kids are told not to do something they do it out of curiosity and self control. I feel without relationships there would be no interesting story-line, even if there are bad ones as well as good. Wealth/jealously comes next, I linked these two together because they relate. Money is such a big issue; it's what makes the brothers so different. Being young money was no object it meant nothing but it changes when they grow up... money meant the better life, which sparked off the jealously. My number five was childhood issues, as its how the story begins and now and again due to the characters childhood things happen, both good and bad. We were then given a task which lead on from these and it was to still image each of our five prioritised points. ...read more.

For superstition we agreed on 'if the wind changes your stay like that'. For betrayal/loyalty we had one character saying 'I betrayed', in a quiet and guilty way and another said 'I stayed loyal', in the opposite tone of voice and quite loud. We felt it would be good to use a line from the book in the relationship still image. 'My child', worked well as it summed up the story, was short but at the same time powerful and effective. For wealth/jealousy we had one person saying 'I have it... don't want it', and another saying 'don't have it... just want it'. And for the final image we used 'mummy says we can't do that', showing the boys know it wrong, but still do it anyway. We had to body sculpture a partner into a 7year old boy; I made my partner sit on the floor with crossed legs and his head in his arms and a grumpy face. I then moulded him into a 14year old this time he was stood up hands in his pockets and looking at the floor, sort of bored. ...read more.