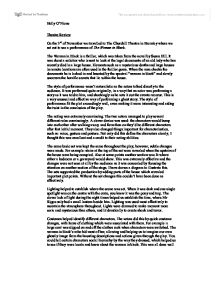 Review: 'The Woman In Black'

Theatre Review On the 3rd of November we travelled to The Churchill Theatre in Bromley where we set out to see a performance of The Woman in Black. The Woman in Black is a thriller, which was taken from the novel by Susan Hill. It was about a solicitor who is sent to look at the legal documents of an old lady who has recently died in a large house. Elements such as a mysterious deaths and large houses in remote locations are often used in the thriller genre. When the man checks the documents he is locked in and haunted by the spectral "woman in black" and slowly uncovers the horrific secrets that lie within the house. The style of performance wasn't naturalistic as the actors talked directly to the audience. It was performed quite originally, in a way that an actor was performing a story as it was told to him, and shockingly as he acts it out the events reoccur. This is a very unusual and effective way of performing a ghost story. The style of performance fit the plot exceedingly well, even making it more interesting and aiding the twist in the conclusion of the play. ...read more.

Without the set changes this couldn't have been done as effectively. Lighting helped to establish where the scene was set. When it was dark and one single spotlight was on the centre with the crate, you knew it was the pony and trap. The clever lack of light during the night times helped us establish the time, where Mr Kipps only had a small lantern beside him. Lighting was used most effectively to ascertain the atmosphere throughout. Lights were dimmed to make moment more eerie and mysterious than others, and lit drastically to create shock and terror. Costumes helped identify different characters. The actors did this by quick costume changes, with items of clothing which were associated with them. For example: a large coat was slipped on and off the clothes rack when characters were switched. The woman in black's robe hid most of her, allowing and helping us to imagine our own ghostly image from the haunting descriptions and actions given through the play. You could tell certain characters social hierarchy by the way they dressed, which helped us to see if they were locals and knew about the woman in black. ...read more.

New information was given and hinted at multiple moments, making the play's plot deepen and accelerate as it got even more complicated, exciting and terrifying. Its atmosphere was well placed, with the right mix of suspense, mystery and terror created by the horror filled screams, eerie music and frightening narration. If I were the director of this production I wouldn't give so much information away at the beginning, especially regarding the letters on the gravestone as it made the plot extremely easy to figure out and left a sense of impatience when more and more clues were needlessly thrown at us. However, this could be used to create dramatic irony instead of predictability; however, in this case it was too ambiguous to fathom whether the plot was meant to be known by the audience at the beginning or not. Overall, I thoroughly enjoyed the production and was sufficiently terrified several days after it. Its subtle sound affects to instil terror such as hoof beats and music boxes are extremely affective on leaving a lasting affect, while the shrill, piercing screams created a thoroughly successful fright immediately. This excellently structured plot coupled with amazing acting, lighting, sound and set design made it a memorable performance that is worthy of being titled a thriller. Holly O'Nione ...read more.