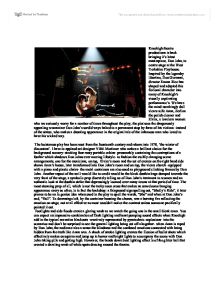 Kneehigh theatre productions is back bringing it's latest masterpiece, Don John, to centre stage at the West Yorkshire Playhouse. Inspired by the legendry libertine, Don Giovanni, director Emma Rice has shaped and adapted this fictional character into many of Kneehigh's visually captivating performance's. We have the mind-numbingly dull vicars wife Anna, Zerlina the polish cleaner and Elvira, a lovelorn women who we seriously worry for a number of times throughout the play; the plot sees the dangerously appealing womanizer Don John's sordid ways halted to a permanent stop by three of his victims- instead of the statue, who makes a daunting appearance in the original tale of the infamous man who loved to have his wicked way. The boisterous play has been reset from the fourteenth century and reborn into 1978, 'the winter of discontent'. I have to applaud set designer Vikki Mortimer who makes a brilliant choice for the background scenery: stacking four rusty portable cabins- presumably containing the contraptions of a funfair which shadows Don Johns ever moving lifestyle- to fashion the swiftly changing scene arrangements, one for the musicians, on top, Elvira's room and the set of creates on the right hand side shows Anna's house, later transformed into Don John's room and on top, the vicars church -equipped with a piano and plastic chairs- the metal containers are also used as playground climbing frames by Don John. ...read more.

A very good sound effect was one created by popping balloons, which imitated the sounds of gunshots almost perfectly, in Don John's nightmare where all the people who's lives he had effected comes at him with a balloon in hand and he tries to fend them off with his gun but his attempt deems to be futile. Seventies styled costumes armed with flare jeans and multicoloured tops with striped designs was another feature of the show that took us back to the winter of 1978. Don John was dressed in a woollen jumper, leggings and knee high boots, Zerlina flitted around the stage in scarlet platforms, Anna was dressed in old brown clothes and Elvira, seen in a business like outfit later did a costume change and transformed from her uptight persona and into a loose women in a red dress. The costumes were very appropriate as each character was given some to wear that would reflect them over all, for example: Zerlina's zany skirt and high platforms mirrors a quirky personality whilst Anna, dressed in uninspiring brown garments two sizes too big, reflected her plain personality. However, I was disappointed to see Don John's costume change into an ugly dress for the second half of the play. ...read more.

Although, at the very beginning, the rebellious drinking communion brought a slight smile to my face. Her worst moments though, were in the scene where the three women, Elvira, Zerlina and Anna decide to take their revenge on Don John by uniting and thus becoming stronger women. However, Anna failed to show any change from stale vicars wife to an independent woman and in one of the final scenes- where Anna is shown leaving her husband because the dreary woman was in search of a so-called 'adventure'- is painfully rubbish to watch mainly due to the same reason that crops up a many a times in the play- Anna's non existent personality. Overall, the play was enjoyable and definitely a funny performance to watch. The alluring swagger of Don John was hypnotic throughout and the highlights include everything Zerlina. However, if I was to direct this play I would make the ending tilt towards the more realistic side and not be as symbolic with the props, for example; the present for Elvira with a baby inside wasn't that clever. Also, I would get rid of the cheesy Barry White number at the end altogether- that kind of last ditch attempt to woo the audience over in the form of a get-the-girls-off-the front-row-and-make-them-dance strategy, I expect from some high school performance. ...read more.