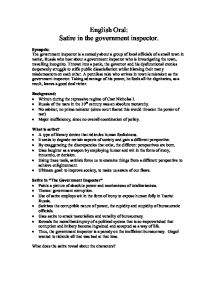 Satire in the government inspector.

English Oral: Satire in the government inspector. Synopsis: The government inspector is a comedy about a group of local officials of a small town in tsarist, Russia who hear about a government inspector who is investigating the town, travelling incognito. Thrown into a panic, the governor and his dysfunctional cronies desperately struggle to stifle public dissatisfaction whilst blaming their many misdemeanors on each other. A penniless rake who arrives in town is mistaken as the government inspector. Taking advantage of his power, he fools all the dignitaries, as a result, leaves a good deal richer. Background: * Written during the repressive regime of Czar Nicholas I. * Russia of the tsars in the 19th century was an absolute monarchy. * No cabinet, no prime minister (since court feared this would threaten the power of tsar) * Major inefficiency, since no overall coordination of policy. What is satire? * A type of literary device that ridicules human foolishness. * It seeks to degrade certain aspects of society and gain a different perspective. * By exaggerating the discrepancies that exist, the different perspectives are born. * Uses laughter as a weapon by employing humor and wit in the form of irony, innuendo, or derision. ...read more.

In the end, the postmaster follows the advice of the governor and opens a letter addressed to somebody in St Petersburg written by the 'government inspector. However, contrary to his initial attitude, the governor demonstrates his hypocrisy by saying ' how dare you interfere with the official correspondence of such and important person?' He is in a position of integrity, but he is the exact opposite of a person of integrity, so he tries to cover everything up on the surface to make it appear that he's a good, 'honest folk'. The sycophantic governor feels he must appease the higher-ranking official to gain his prestige by letting him sample for free the best hospitality, including the finest food and drink. He acts like he has everything under control by ordering everyone around, but he knows that his town is unmanageable and that the officials are foolish. IN his dream about the two giant black rats, he says that 'they sniffed - everywhere, everything, everyone'. This symbolizes his dysfunctional running of the tow, that he is aware of the many flaws and cracks of the administration. The Postmaster - The Postmaster is equally, if more, willing to snoop around people's letter - He has always indulged in the interesting habit of opening letters. ...read more.

Everyone tries to be the opposite of what they are. Khlestakov - Audience knows he's not the government inspector, but when he meets the governor for the first time, there is misunderstanding - dramatic irony. The governor assumes he's the government inspector who's trying to conceal his identity, he is apologetic for the rude behavior so offers him 'more appropriate accommodation' in his own home. Khlestakov thinks the governor is taking him to jail for not paying the rent. - After he learns that the governor thinks he's a high=-ranking official, his acute brain immediately plays along to his advantage. - He walks off in the end with borrowed money and the adoration of both the governor's wife and his daughter. - His character shows how certain people in society will do anything to uphold their dignity. Appearance vs. reality is an ongoing theme. - Desires things out of reach. Very fussy. - Although he has a pittance, he still wants a three-course meal. - He would rather 'starve and arrive home wearing a suite cut in Petersburg'. - He says he hates hypocrites, but he is the biggest hypocrite of all. When the postmaster reads the letter written by Khlestakov, the foolish officials realize the whole thing was a fraud. The letter ultimately satirizes their foolishness, stupidity, folly, venality, corruption, cupidity, and desire for face. Things to note: - ...read more.