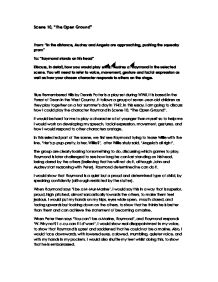 From: “In the distance, Audrey and Angela are approaching, pushing the squeaky pram”

To: “Raymond stands on his head”

Discuss, in detail, how you would play either Audrey or Raymond in the selected scene. You will need to refer to voice, movement, gesture and facial expression as well as how your chosen character responds to others on the stage.

Blue Remembered Hills by Dennis Potter is a play set during WWII. It is based in the Forest of Dean in the West Country. It follows a group of seven-year-old children as they play together on a hot summer’s day in 1942. In this essay, I am going to discuss how I could play the character Raymond in Scene 10, “The Open Ground”.

It would be hard for me to play a character a lot younger than myself so to help me I would work on developing my speech, facial expression, movement, gestures, and how I would respond to other characters onstage.

In this selected part of the scene, we first see Raymond trying to tease Willie with the line, ‘Her’s p-pup-pretty, is her, Willie?’,  after Willie shyly said, ‘Angela’s all right’.

The group are clearly looking for something to do, discussing which games to play. Raymond is later challenged to see how long he can last standing on his head, being dared by the others (believing that he will not do it, although John and Audrey start reasoning with Peter), Raymond determined he can do it.

I would show that Raymond is a quiet but a proud and determined type of child, by speaking confidently (although restricted by the stutter).

When Raymond says ‘I be a M-Mur-Marine’, I would say this in a way that is superior, proud, high pitched, almost sarcastically towards the others, to make them feel jealous. I would put my hands on my hips, eyes wide open, mouth closed, and facing upwards but looking down on the others, to show that he thinks he is better than them and can achieve the statement of becoming a marine.

When Peter then says ‘You can’t be a Marine, Raymond’, and Raymond responds ‘W-Why not? I c-cu-can if I d’want’, I would show real disappointment in my voice, to show that Raymond is upset and saddened that he could not be a marine. Also, I would face downwards, with lowered eyes, a slowed, mumbling, quieter voice, and with my hands in my pockets. I would also shuffle my feet whilst doing this, to show that he is embarrassed.

When playing Raymond, I would put my cowboy hat at an angle to hide his face almost, to show that he is a quiet, timid child, constantly shuffle my feet and put my hands in my pockets, to show that he is a fidget, and shy. I would specifically use these movements when Raymond says, ‘We d-dud-don’t want to p-pup-play House. Do us?’ because it is the only line where Raymond adds to the conversation about which game to play, and tries to get some recognition by saying something he expects the other boys to agree with, which is shown by the last two words in the line, ‘Do us?’.

I would let my character’s feelings of being proud be clear when Raymond says ‘You can b-bub-borrow my knife’. This is the second line in which Raymond shows that he is proud, the first being ‘I be a M-Mur-Marine’.

When Raymond says ‘You can b-bub-borrow my knife’, he obviously feels strongly about his knife, expecting Peter to agree to it, and therefore proud of it to offer it to Peter. The other characters are likely to already know about the knife, for Raymond to offer it, which makes Raymond feel confident about doing so.

My facial expression would be of an open-eyed nature, with a wide grin, to give the impression that it’s a good trade and to make Peter feel confident about agreeing to the offer.

Raymond feels confident when speaking to both Peter and John, as shown when Raymond retaliates with the line ‘W-Why not? I c-cu-can if I d’want’. I would show Raymond speaking with a tinge of bitterness when he says ‘I c-cu-can if I d’want’, standing up to Peter and John, giving the impression that he is not scared of them. I would be in direct eye contact with both boys (with my eyes squinting), standing close, almost over them. My hands would be out of my pockets and on my hips.