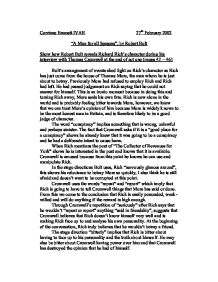 Show how Robert Bolt reveals Richard Rich&amp;#146;s character during his interview with Thomas Cromwell at the end of act one (pages 42 &amp;#150; 46)

Corrinne Emmett IVAH 27th February 2002 "A Man for all Seasons", by Robert Bolt Show how Robert Bolt reveals Richard Rich's character during his interview with Thomas Cromwell at the end of act one (pages 42 - 46) Bolt's arrangement of events shed light on Rich's character as Rich has just come from the house of Thomas More, the man whom he is just about to betray. Previously More had refused to employ Rich and Rich had left. He had passed judgement on Rich saying that he could not answer for himself. This is an ironic moment because in doing this and turning Rich away, More seals his own fate. Rich is now alone in the world and is probably feeling bitter towards More, however, we know that we can trust More's opinion of him because More is widely known to be the most honest man in Britain, and is therefore likely to be a good judge of character. The word "conspiracy" implies something that is wrong, unlawful and perhaps sinister. The fact that Cromwell asks if it is a "good place for a conspiracy" shows he already knew that it was going to be a conspiracy and he had a deliberate intent to cause harm. ...read more.

The stage direction "bitterly" implies that Rich is bitter about having to face up to his personality and the truth about himself. He may also be bitter about Cromwell having power over him and that Cromwell has destroyed the opinion that he had of himself. The change in Rich's demeanour at "gripping" is illuminating. Rich is trying to hide his feelings from Cromwell, trying to control himself and holding himself back. He needs to hold himself together in front of Cromwell. The words "conscious cynicism" alert us to the fact that Rich still has a conscience, something that could stop him from becoming totally corrupt. I think that if he had paid attention to this feeling he may not have become corrupt. When Bolt describes Rich as being "almost sure" that he has no beliefs, he is suggesting that Rich is not completely free of his conscience and is trying to hold onto something pure when he realizes his. After Cromwell outlines the "administrative convenience" of helping Henry VIII to "change his woman", Rich seems a bit gloomy. ...read more.

He is unhappy at the prospect of having to do similar things in the future. When Cromwell speaks of intimidating More, Rich's face is described as being "nasty" by Bolt and he insists that More is innocent because he still respects More and he still has his independence, he hasn't been completely overtaken by More. He is also pointing out to Cromwell that what he's doing is wrong. Rich's three exclamations; "You wouldn't find him easy to frighten!" and "You've mistaken you're man this time!" and "He doesn't know how to be frightened!" express that he is feeling guilty and now trying to stick up for More, that he doesn't like Cromwell very much. Also, that he is too outspoken, he hasn't yet learned when to keep quiet. The incident with the candle, when Cromwell burns Rich's hand is significant because it shows that Rich is now scared of Cromwell and previously, in his experience, he hasn't realized the lengths to which cruel people will go. Altogether I find that Rich is easily led, easily bought and spineless. I think that it is ironic that Rich rose to be Chancellor himself, and after all he had done, he died peacefully in his bed. ...read more.