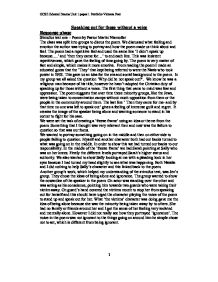 Speaking out for those without a voice

Speaking out for those without a voice Response phase Stimulus text one - Poem by Pastor Martin Niemoller The class was split into groups to discus the poem. We discussed what feeling and emotion the author was trying to portray and how the poem made us think about and feel. The poem had a repetitive feel and used the same line 'I didn't speak up because....' and 'then they came for...' to end each line. This was insistent repetitiveness, which gave the feeling of time going by. The poem is very matter of fact and simple, which makes it more emotive. From reading the poem I made an educated guess that the 'They' that kept being referred to were the Nazis who took power in 1933. This gave us an idea for the era and social background to the poem. In my group we all asked the question 'Why did he not speak out?'. We know he was a religious man because of his title, however he hasn't adopted the Christian duty of speaking up for those without a voice. The first thing that came to mind was fear and oppression. The poem suggests that over time these minority groups, like the Jews, were being taken to concentration camps without much opposition from them or the people in the community around them. The last line ' Then they came for me- and by that time no one was left to speak out' gives a feeling of immense guilt and regret. It creates the image of the speaker being alone and wanting someone to stand in his corner to fight for his case. We were set the task of creating a 'freeze frame' using an idea or theme from the poem. Something that I thought was very relevant then and now was the failure to question so that was our focus. We wanted to portray something going on in the middle and then on either side to people failing to question. ...read more.

There was a dead civilian on the floor that the boy had killed and then I as the mother sat on the floor. I was at this low point to convey my helplessness of the situation. My hands were placed on my ears as I was trying to block out the nightmare as I prepared for the sound of a gunshot. I was sat in the middle to show that the nightmare was all around me and I could not escape although I was not actually there. We wanted to show that the boy had killed once and was now preparing to kill again, but to make it more sinister he was going to kill his own mother. The labour camp had desensitised him and this was what the mother feared. After discussing the scene another person from a different group was added to she if it would work with another person and/or if it would change the meaning. The daughter was added and she was trying to pull the son away from shooting the mother. This kept the basic idea the same but it gave the mother some hope that she still had family who loved her and wanted to protect her. Another group did the daughters secret. The daughter had the central position with three people lying on the floor in a circular around her. Two were already dead and one was dying and reaching out the front for help. The daughter did not know how to help and this was portrayed by the guilty helpless look on her face. The bodies conveyed how she felt suffocated and trapped doing something that she no longer could do with much success anymore. The fact she was standing showed that she no longer felt close to the patients anymore and she felt somewhat isolated. What was also very interesting was that the one person who was alive was not reaching out the daughter for help but instead the audience which showed that the patient did not trust the daughter as a nurse and carer anymore. ...read more.

This workshop explored how it is not just soldiers who are evolved in war fair but also normal everyday people. Everyone is affected by the way one-person acts or the choices that one person makes. Nowadays people are very secluded and less trustworthy of others. The sense of community is gradually being lost. This is the wrong way to go because in order to fight terrorism and to prevent children of the future growing up with that hatred in their hearts, which can turn then down the path of terrorism we must educate each other out of ignorance. The culture around us is so rich and diverse and yet we exclude and disapprove of what we don't understand. People like to stick to their own groups and if we do not try and mix we will never fully understand each other and we will miss out. Script- Final scene Two girls come on stage form different directions GIRL1- you alright hun? GIRL2-Yea, you? Girl one nods and smiles as she picks up c.d player and places one head phone in her ear. Voice over 'next stop Angles' GIRL2-oh...come on, quick. Two girls get on the train followed by the daughter who is carrying shoes. GIRL1-I love this song Cold play 'The scientist' plays GIRL2-what is it? Lets have a listen. Girl one passes headphone over I haven't heard this in ages 'Freeze frame', spotlight on the daughter with distant look on her face. DAUGHTER- whispers he's dead Voice over 'now arriving at Angels' GIRL1- well this is my stop bye GIRL2-Bye Girls exit DAUGHTER-He's dead Daughter slowly gets off the train with head down NEWSELLER- Read all about it! He's dead! He died! DAUGHTER-I know... NEWSELLER-sorry luv, what was that? Looks at her and carries on walking WOMEN1-on the phone Yea, I know! He died! That's right, he's dead. DAUGHTER-hysterically I know! I KNOW! WOMEN1- sharply What?... mutters Freak DAUGHTER- whispers He's dead GCSE Edexcel Drama Unit 1 paper 1 Portfolio Victoria Port ...read more.