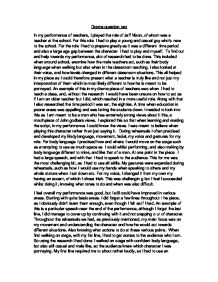 Teechers - John Goodber. In my performance of teechers, I played the role of Jeff Nixon,

Drama question two In my performance of teechers, I played the role of Jeff Nixon, of whom was a teacher at the school. For this role I had to play a young and casual guy who's new to the school. For the role I had to prepare greatly as it was a different time period and also a large age gap between the character I had to play and myself. To find out and help towards my performance, alot of research had to be done. This included when around school, examine how the male teachers act, such as their body language when walking but also when in the classroom teaching. I also looked at their voice, and how levels changed in different classroom situations. This all helped in my piece as I could therefore present what a teacher is truly like and not just my interpretation of them which is most likely different to how he is meant to be portrayed. ...read more.

For body language I practised how and where I would move on the stage such as attempting to use as much space as I could whilst performing, and also making by body language different to mine, and like that of a man. At one point in the piece I had a large speech, and with that I had to speak to the audience. This for me was the most challenging bit, as I had to use all skills. My gestures were expanded during rehearsals, such as how I would use my hands when speaking to others and my whole stature when I sat down etc. For my voice, I changed it from my own my having an accent, of which I chose Irish. This was challenging but I feel I succeeded whilst doing it, knowing what tones to do and when was also difficult. ...read more.

My first line required me to shout rather loudly, so I had to use an appropriate, authoritative tone to show that I was the one in charge of the situation, like that of a teacher. This, along with my facial expressions all helped make an impression on the audience showing my role in the piece. In the mid section of the piece, I had a speech all about Mr. Nixon's views. With this I had to be extremely serious but still being casual and connecting with the audience to make them listen and understand. With my hands I used quite opening gestures to let them in to what I am saying and moved around the stage to connect with everyone in the audience, and make sure eye contact was made. I feel my performance was well done but I should of, in rehearsals, though about how I would present my lines to the others in the group and those in the audience as I, at some points felt I said things in the wrong type of manner. ...read more.