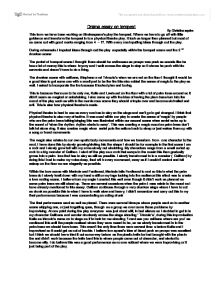 Drama essay on tempest By Christina squire This term we have been working on Shakespeare's play the tempest. Where we have to go off with little guidance and transform the tempest in to a physical theatre play. It took us longer than planned but most of us came out with good marks ranging from 4 - 17. With every one inputting ideas through out the play. During rehearsals I imputed ideas through out the play especially within the banquet scene and the 2nd drunken scene The period of banquet scene I thought there should be waitresses as prospo was posh as sounds like he has a lot of money this is where bryony and I walk across the stage In step so It shows he posh with his servants and doesn't have to do a thing. The drunken scene with calibans, Stephano and Trinculo's when we are sat on the floor I thought It would be a good idea to get some one with a small part to be the fire this also added the sense of magic to the play as well. ...read more.

My characters range from a small curled up rock to a big monster of Caliban. I start off the play as a rock that sways to the music this then gradually grows into a palm tree that has to stay as still as possible. I slowly transformed in to a monster (Caliban) by doing this I had to make my voice deep, thud with every movement, sway as if I couldn't control and fall asleep on the floor as non elegantly as possible. Within the love scene with Marinda and Ferdinand, Marinda tells Ferdinand to rest so this is what the palm trees do I slowly knelt down with my hands still on my legs looking into the audience this effect was to create a love resting scene. I believe from my angle I created this well even though it didn't work as planned as some palm trees we still stood up. There are several occasions when the palm trees relate to the mood as I have already mentioned in this essay. ...read more.

I believe aerial should be in a long flowing white dress because she is a sprit and any muck that gets on her vanishes. I choose this costume because aerial sounds power full and respected that she can do anything she wanted this is why I designed her in a dress and the era would have been quite old fashioned where women weren't allowed dresses over their knees! Caliban should be in small 3/4 lengths and tight top that is to small for him which is ripped so it shows he has been their along time and he is scruffy this would show people he doesn't care what he looks like, with scruffy hair and no shoes. He is a slave so this outfit would represent that with in the character Prospo should be in a bow tie waist jacked and smart trousers this is because he is the most power full one on the island and owns it. He is in charge of all the sprits and keeps control of the island In conclusion I believe the final performance went well. And helped us progress with our mistakes to learn from them!! ...read more.