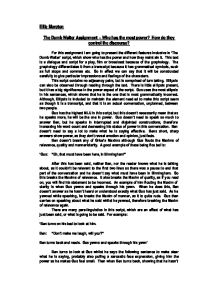 The Dumb Waiter Assignment - Who has the most power? How do they control the discourse?

Ellie Moreton The Dumb Waiter Assignment - Who has the most power? How do they control the discourse? For this assignment I am going to present the different features inclusive in 'The Dumb Waiter' script, which show who has the power and how they maintain it. This text is a dialogue and script for a play, film or broadcast because of the graphology. The graphology differentiates it from a transcript because it has grammatical symbols, such as full stops and commas etc. So in effect we can say that it will be constructed carefully to give particular impressions and feelings of the characters. This script contains no adjacency pairs, but is comprised of turn taking. Ellipsis can also be observed through reading through the text. There is little ellipsis present, but it has a big significance in the power aspect of the script. Gus uses the most ellipsis in his sentences, which shows that he is the one that is most grammatically incorrect. Although, Ellipsis is included to maintain the element needed to make this script seem as though it is a transcript, and that it is an actual conversation, unplanned, between two people. ...read more.

It also breaks the Maxim of quality, as if you read on, you will find his statement to be incorrect. An example of him flouting the Maxim of clarity is when Gus yawns and speaks through his yawn. When he does this, Ben doesn't answer as he hasn't heard or understood exactly what Gus has just said. As he yawned while speaking, he breaks the Maxim of manner, as it is quite rude. Gus then carries on speaking about what he said whilst he yawned, therefore breaking the Maxim of relevance again. There are many para-linguistics in this script, which are an effect of what has just been said, or what is going to be said. For example: 'Ben turns on his bed to look at him. Ben: "Don't make me laugh, will you?" Ben turns back and reads. Gus yawns and speaks through his yawn' Ben turns to look at Gus whilst he says the following sentence to make clear what he is saying, probably also pulling a sarcastic face expression, giving him the power as he makes Gus feel small. ...read more.

This makes the reader possess particular views of each character due to the careful construction of this text. Ben is the only one who uses initiators, which he uses twice in this script. He uses the word 'well' as the initiator. Ben uses this to evoke an answer from Gus because in both cases it is followed by a question. It also has a semantic meaning of 'so what' in the first case. There is only one subordinating conjunction in this script, which is used by Gus. This is "because" and it shouldn't be present at the beginning of a sentence and it is not actually necessary to make sense of the sentence. Intonation can also be presumed to be present in this script: 'Ben: "How do you know?"' The 'you' in this extract is emphasised and the pitch will be low. This gives the pragmatic impression of the person meaning 'who told you? You shouldn't know.' To conclude this assignment, I have defined different important paralinguistics, prosodic features and other speech and linguistic features which determine who has the power. I have found that Ben has the most power and that the writer of this script controls this power. . ...read more.