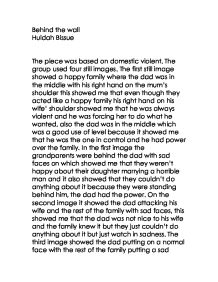 The piece was based on domestic violent. The group used four still images. The first still image showed a happy family

Behind the wall Huldah Bissue The piece was based on domestic violent. The group used four still images. The first still image showed a happy family where the dad was in the middle with his right hand on the mum's shoulder this showed me that even though they acted like a happy family his right hand on his wife' shoulder showed me that he was always violent and he was forcing her to do what he wanted, also the dad was in the middle which was a good use of level because it showed me that he was the one in control and he had power over the family. In the first image the grandparents were behind the dad with sad faces on which showed me that they weren't happy about their daughter marrying a horrible man and it also showed that they couldn't do anything about it because they were standing behind him, the dad had the power. ...read more.

Form The form was still image. It was told by the characters facial expressions when the mum was getting beating up the rest of the family members all had sad faces. Body language when the dad had is right hand on his wife's shoulder on the first and last picture to show the audience he had control and he was forcing his wife to do things. Levels when the grand parents were at the back, the dad in the middle and his wife and kids at the front, which showed that he was the boss, and that the mum's grandparents were powerless they couldn't do anything about it. Structure The structure was linear because the still images were put all in order and even though the first and fourth images were the same it showed me that the situation happened more then once. I liked it because the audience including myself sympathised with the characters more because it happened all the time. ...read more.

Positive comments about performance The best things about their performance was how they symbolised being trapped and powerful. They use of body language, levels and the same still images being showed over again represented those two words because the body language the dad and the right hand showed how he was in control, him being in the middle showed how he was powerful and the first still image to played over again showed that it happened more then once. Improvement They need to put more emotion while talking because it sounded as if they didn't care and also changing their voices would make their piece more effective because it makes the audience believe more into the characters. Symbolism The hand on his wife shoulder symbolised that he forced her and he had control over her. They were all smiling and yet he was still using force, which showed that he always forced her to things for him, as she couldn't do anything about it. ...read more.