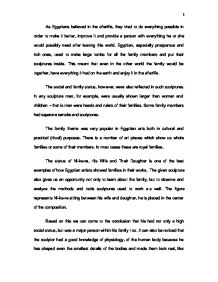 The statue of Ni-ka-re, His Wife and Their Daughter is one of the best examples of how Egyptian artists

As Egyptians believed in the afterlife, they tried to do everything possible in order to make it better, improve it and provide a person with everything he or she would possibly need after leaving this world. Egyptian, especially prosperous and rich ones, used to make large tombs for all the family members and put their sculptures inside. This meant that even in the other world the family would be together, have everything it had on the earth and enjoy it in the afterlife. The social and family status, however, were also reflected in such sculptures. In any sculpture men, for example, were usually shown larger than women and children - that is men were heads and rulers of their families. Some family members had separate sertabs and sculptures. The family theme was very popular in Egyptian arts both in cultural and practical (ritual) purposes. There is a number of art pieces which show us whole families or some of their members. In most cases these are royal families. The statue of Ni-ka-re, His Wife and Their Daughter is one of the best examples of how Egyptian artists showed families in their works. ...read more.

Firstly, very well and clearly both sculptures express the family theme. Secondly, in every sculpture there is a child near a parent. One more thing in common is that the major member of the family sits on the chair and the size of his or her figure is bigger. All the statues present other family members sitting or standing near the major person's legs. It is known that sometimes children are shown as tall as their mothers. These art works, however, present children to be smaller than any of the parents. Each of the statues, reflects family and its values in a different way. The figure of Ni-ka-re's child, for example, is made small in order to draw attention to the man's greatness and power, to his high status and a wide range of abilities and authorities within the society as well as within the family. At the same time the figure of Khentet-ka's son is small because he is very little and that is what the sculptor wanted to express in the work. The sculpture of Ni-ka-re, His Wife and Their Daughter shows the whole family. We can see a mother, a father and a daughter. And there is no father in the statue of Lady Khentet-ka and Her Son. ...read more.

We have many albums full of pictures of us and of people we love and live with. We also have videos to watch and remember the happiest moments. But the most important and different from Egyptian philosophy is that we collect such things in order to remember about the personality instead of the social status or importance within the society or family. Instead of great and magnificent pyramids, grand vaults with sculptures and paintings only a tomb slab reminds us once again about those who are not with us any more. So, Christianity with its emphasis on spiritual rather than material values has minimized a consumer culture regarding death. This, however, is not a bad feature of the religion. I believe it is more important to be remembered as a good person instead of having great monuments, but negative people's opinion to join them. Good memories may last much longer than all the pictures, videos, heirlooms and sculptures devoted to some person. That is why, I believe, it is not bad that we do not have so many memorials for those whom we love. Probably this may help to save memories about the person himself instead of diminishing the person's importance by worrying too much about whether we have enough of his pictures or whether some memorial is good and fancy enough. ...read more.