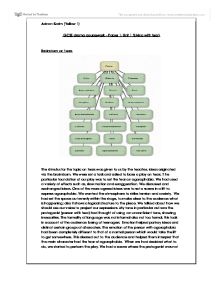 The stimulus for the topic on fears was given to us by the teacher, ideas originated via the brainstorm. We were set a task and asked to base a play on fears. The particular foundation of our play was to set the fear on agoraphobia.

GCSE drama coursework - Paper 1, Unit 1 (Living with fear) Brainstorm on fears The stimulus for the topic on fears was given to us by the teacher, ideas originated via the brainstorm. We were set a task and asked to base a play on fears. The particular foundation of our play was to set the fear on agoraphobia. We had used a variety of effects such as, slow motion and exaggeration. We discussed and exchanged ideas. One of the more agreed ideas was to set a scene in a lift to express agoraphobia. We wanted the atmosphere to strike tension and anxiety. We had set the space out evenly within the stage, to make clear to the audience what is happening; also it shows a logical structure to the piece. We talked about how we should use our voice to project our expressions. My tone in particular as I was the protagonist (person with fear) had thought of using an unconfident tone, showing insecurities. The formality of language was not informal also not too formal, this took in account of the audience being of teenagers. Emotion helped portray ideas and distinct certain groups of characters. The emotion of the person with agoraphobia had been completely different to that of a normal person which would take the lift to get somewhere. This cleared out to the audience and helped them interpret that the main character had the fear of agoraphobia. When we had decided what to do, we started to perform the play. We had a scene where the protagonist was not allowed to take the stairs as it was being worked on, and had to take the lift which he was afraid of. Slow motion was used to highlight the moment of which showed an event which had great deal. It was used when a worker on the stairway says; "use the elevator." ...read more.

I know, it seems embarrassing to see a young adult like me, do such a thing that's why Ive come to you. Anyways after I eat my breakfast, I go to have a bath for a use three different soaps before I get out. Psychiatrist: why do you feel the need to clean? Psychiatrist fiddles with his pen, subject is ready to leave, but sits down as he anticipates one last question coming. He looks up at the psychiatrist; the psychiatrist examines his eyes, fixing them on his pupil. Subject: I have a freakish development of fear of dirt. It's slowly killing me inside. I can't stand dirt; it's just so disgusting and gruelling to see. I just feel the need to clean because it's just a habit, a ritual, something that can't be disengaged from my life. The technique of hot seating was used here. It was used to deepen the audiences understanding of the character being interviewed; it also gives knowledge to the audience on the background of the character. It shows the audience on the way the character is i.e. how he interacts, talks, uses body language, this could show his level of confidence and way of being. It also makes the character more realistic and believable. Thought tracking is another effect commonly used in drama it's used to help the audience acknowledge and attain information about the character. Inner thoughts are expressed in a particular instant in the drama/ or in during a freeze frame. The effect is used to show the thought of a character, like an example is that if someone is thinking something but does not want to say it, the thought will be tracked and expressed to make the audience involved and know how the character feels. This could be used to tie in with dramatic irony, e.g. When a person acts like things are right, but his thought contradicts he's actions. ...read more.

Our play overall went decently and to plan. We received positive feedback also. Text #4 could link to text #1 the man in depression. Both concepts relate to obsessive compulsive disorders and both plays we did used exaggerated gestures. If we had performed this play to a wider audience, we would like to have portrayed the message of the obsession with trying to have clean hands, to wipe the symbolic blood of Lady Macbeth's actions. Obsessions and compulsive disorders evidently make interesting drama; it actually gives the audience a taste of what it's like to have a disorder which many regard as weird. In drama during this project ive learnt that people with disorders should be respected and not made fun of as it's a serious, genuine health issue. It's a decent area to explore drama, to use effects and try new things, but it's not that versatile of a topic, I found myself repeating the same effects on making the dramas, it got a bit tedious and unexciting. Furthermore I must admit I did have fun whilst performing the supermarket scene the most, and helped me develop a new form of drama I did not know of: surrealism. I felt that overall, this unit of work was a learning curve, and I could have worked better. But I'm keen to learn more when starting the next project. Marking the moment was a particularly useful technique; it was powerful because it grasped the audience to one point in the play which emphasised the social context of the play and its morals with it. The actual effect helped the play reach a climax. I also thought using split scene to show juxtaposition was quite ingenious, giving time for the audience to acknowledge the difference between two characters and what not. I also observed other groups constantly using freeze frame. Which froze the scene and a character would usually step out and perform a monologue. The effect was somewhat powerful in seeing how the character feels, and helps authenticate the character through characterization. ?? ?? ?? ?? Adnan Karim (Yellow 1) ...read more.