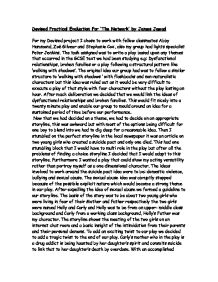 The task assigned was to write a play based upon any themes that occurred in the GCSE text we had been studying e.g: Dysfunctional relationships, broken families or a play following a structural pattern like 'walking with shadows'.

Devised Practical Evaluation For 'The Network' by James Jawad For my Devised project I chose to work with fellow classmates Abby Hammond, Zo� Gilvear and Stephanie Cox, also my group had lights specialist Peter Jenkins. The task assigned was to write a play based upon any themes that occurred in the GCSE text we had been studying e.g: Dysfunctional relationships, broken families or a play following a structural pattern like 'walking with shadows'. The original idea our group had was to follow a similar structure to 'walking with shadows ' with flashbacks and non-naturalistic characters but this idea was ruled out as it would be very difficult to execute a play of that style with four characters without the play lasting an hour. After much deliberation we decided that we would link the ideas of dysfunctional relationships and broken families. This would fit nicely into a twenty minute play and enable our group to mould around an idea for a sustained period of time before our performance. Now that we had decided on a theme, we had to decide on an appropriate storyline, this was awkward but with most of the options being difficult for one boy to blend into we had to dig deep for a reasonable idea. Then I stumbled on the perfect storyline in the local newspaper it was an article on two young girls who created a suicide pact and only one died. This had one stumbling block that I would have to multi role in the play but after all the problems of finding a choice storyline I decided that I would adapt to this storyline. Furthermore I wanted a play that could show my acting versatility rather than portray myself as a one dimensional character. The ideas involved to work around the suicide pact idea were to be: domestic violence, bullying and sexual abuse. The sexual abuse idea was abruptly stopped because of the possible explicit nature which would become a strong theme in our play. ...read more.

My third role was a rather strange character to play I played Detective Inspector Knowles and he wasn't to be a standard policeman, he was a stressed, obsessive man whose life has been seriously affected by trying a little too hard to get to the bottom of the case. The techniques required for this role were not really challenging just quite difficult to adapt to when you also have two other characters to contend with. Like Holly's Father I have another one on one scene with Zo� (holly) so this does help the lack of continuity as I had a good on stage chemistry with Zo� which helped with all of my characters. All my characters wore smart clothes but The Inspector wore his clothes untucked, open collar and rolled up sleeves as if he was really under stress. During the writing of the play my group and I discussed techniques to ensure that our play had a realistic feel even though there were some supernatural elements. Also we decided to make the deaths look as natural as possible, as we agreed that if this occurred the deaths would not look like a death that would occur in a children's play, such as the pantomime. In terms of forcing reactions for the so called 'deaths' this was not too complex as all of us in the group had experienced a serious loss. This helped add the realism to the emotional reactions used. Our play was based on a lot of stage movement especially when there were more intimate scenes with the characters getting up close and personal, and even when the girls are alone it portrays the fact they are always uncomfortable and cautious of their parents. When playing all my different on stage personas, exaggerated movement was only required when playing the role of Holly's Father, all of the movements made while in this character were often sudden, dynamic style movements. ...read more.

There were many positive parts of the performance which I was delighted with the acting of it. My struggles in the rehearsals were obliterated especially the news report, which had been a real stumbling block previously in the play. Also the character of Dci Knowles came over as a crowd favourite. I was pleased to discover that the hidden humour in the script did not disappoint! The most dramatically effective moment of our play was the emotional final scenes of the play. When Carly's mother tragically kills herself the wave of emotion created in the studio was fantastic to be involved with. Also my scenes with Holly had great aggressive chemistry and were very effective in making the plot of the play clear. There were definitely improvements which could have been made if there was another chance to perform. We could have actually shown the dead body of Carly on stage rather than just assuming that she was dead, this might have provided a more disturbing but gripping dimension to the play. The lighting could have been technically improved by the use of more gobos to create the effect of death in the scenes which included death. Our set needed to be more manoeuvrable for people to distinguish the room changes, the computers were too heavy to move quickly and this was a slight weakness in the final performance that we didn't notice in rehearsals. Having an extra technical rehearsal would have greatly benefited us in having a better continuity with the technical aspects of the play. As we still felt that we weren't familiar with some of the techniques used in the tech, our lack of practice with sound was a minor stumbling block. However, overall I was really proud of the way our group executed the running of our play all of our hard work ensured we were pleased with the final result. The real reason I was proud of our performance was how we had raised awareness on bullying, drug abuse, child abuse and manic depression. This was the real achievement. ...read more.