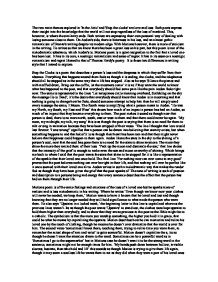 The two main themes explored in 'In the Attic' and 'Stop the clocks' are love and loss. Both poets express their insight into the knowledge that the world will not stop regardless of the loss of mankind. This, however, is where the similarity ends. Both writers are expressing their own personal way of dealing with losing someone close to them. On Auden's side, there is bitterness in his loss, and an almost gothic romanticism of Bronte's writing despite its modern edge. With Motions however, there is more of stoicism in the writing. He writes so that we know there has been a great loss on his part, but this poem is not of the melodramatic substance, which Auden's is. Motions poem is a quiet resignation to the fact that a loved one has been lost. It has in its core, a nostalgic romanticism and sense of regret. It has in its essence a nostalgic romanticism and regret likened to that of Thomas Hardy's poetry. It is these two differences in writing style that I intend to explore. Stop the Clocks is a poem that describes a person's loss and the deepness in which they suffer from their absence. Everything that happens around them feels as though it is ending, the clocks, and the telephones should all be stopped as in the same way that a life has stopped. ...read more.

Which brings me back to where I said that the poet wants the stars that shine to be stopped for it is like a representation of the sparkle that their loved one once held. The final line 'For nothing now can ever come to any good' proves that the poet believes nothing can ever be right in their life, and that nothing will ever be perfect like it once seemed with their loved one alive. Auden writes in such a melodramatic way that makes the reader feel as though they have been given the grief that the poet speaks of. The tone of writing is such of passion and description to a persons being and energy that every sentence describes the effect that the person has had on them through their life. Motions poem is of the same feelings and emotions of the loss of a loved one but he speaks more of realism and is less melodramatic in his writing. Where he writes 'Even though we know now your clothes will never be needed, we keep them,' Motion wants to have it known that he loved and lost and though knowing that they are no longer needed they still hold significance to what made the person who wore them. ...read more.

Motions poem is more personal; he takes something that was theirs and brings it back to life with his movements, whereas Auden relates more everyday things like the sun and the stars to the meaning of someone's life. They both write of mourning for their loved ones but Auden writes as though he believes that his world has ended, or will end shortly whereas Motion knows that he can carry on as long as he treasures a part of a living memory. Where one writes of deprivation, the other seems to write of starvation. Motion writes more of deprivation, his writing shows that he has been deprived of his loved on, Auden however writes in a starved way. The way he phrases what he says is as if he is starved of beauty, like the stars and sun and doves, and of touch and sound like the voice of his loved one. Auden also writes as though he believes he shouldn't be the only having to suffer his loss, he wants the world to suffer with him by depriving the world of the things it needs like sunshine and beauty, he makes the simplicity and fragility of life seem so difficult to come to terms with. Motion, however, wants to suffer in silence and keep his suffering to himself, he prefers to keep everything inside and mourn alone, shut out the world and keep his memories alive in the upstairs of his house. ...read more.