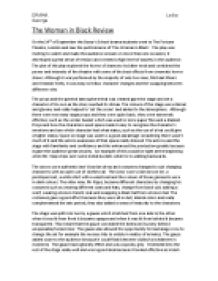 The Woman in Black Review. The props and the general atmosphere that was created gave the stage and set a character of its own

﻿DRAMA Lydia George The Woman in Black Review On the 14th of September the Sexey?s School drama students went to The Fortune Theatre, London and saw the performance of ?The Woman in Black?. The play was riveting to watch and made the audience scream on more than one occasion; it developed a great sense of tension and created a high level of anxiety in the audience. The plot of the play explored the horror of drama to its bitter ends and combined the power and intensity of live theatre with some of the best effects from cinematic horror shows. Although it was performed by the majority of only two men, Michael Mears and Orlando Wells, it was easy to follow character changes and the swapping between different roles. The props and the general atmosphere that was created gave the stage and set a character of its own as the story reached its climax. The colours of the stage were dismal and gloomy and really helped to ?set the scene? and added to the atmosphere. Although there were not many stage props and they were quite basic, they were extremely effective; such as the wicker basket which was used to store paper files and a blanket. ...read more.

The acting is naturalistic but also uses a sense of imagination an example of this would be when he pretended there was a dog in the marsh scene; he did this by bending down with his arms open. The Narrator/Mr Kipps is convincible as he changes from these characters very effectively and believably; for example he changes his accents from a country accent to a city one. He also changes his movements as he changes character, an example of this would be for the old man he walks slower. The actor who played ?the woman in black? didn?t appear much throughout the play, but this added to the whole feeling of suspense and drama because when she did appear it was scary. If she had appeared more often the fear and spookiness she created amounst the audience would have disappeared. In my opinion, I think the dictector of the play had her on stage in just the right balance, because the blood-chilling effect wasn?t lost when she appeared and he left the audience wanting more ? which is always a good way to end it in. ...read more.

This made the audience anxious and nervous because it was completely unexpected and built a lot of tension. As not much was happening, it seemed to be calm but it actually created the ?less is more? effect and the chair kept rocking building the climax to a high. The first part of the play was intentially boring to really emphasises the and climax the events that happen in the second part. The play had an interesting, fast pace story line with lots of twists and suprises which made it all the more exiting to watch. The story was very unpredictable and at moments surprised you, when you least expexted it. The end of the play was really unexpected and ends in a cliff hanger, which leaves the audience to imagine a personal ending for themseleves. Overall I thoroughly enjoyed the performance the mistery, scaryness and clever plot really grabbed me; the whole atmosphere felt great to be part of. The acting and dramatic effects created lots of suspence and increased many heart rates. I went into theatre thinking ?how could live drama scare me??, this play has completely changed my veiws on horror in theatre and anyone who thinks the same should definitely take a trip and go see this blood-chilling, spine-tingling, horror-exploring performance. ...read more.