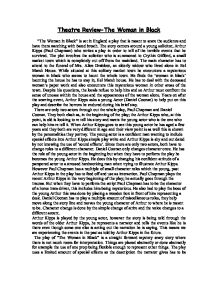 Theatre Review- The Woman in Black

Theatre Review-The Woman in Black "The Woman in Black" is set in England a play that is meant to scare the audience and have them watching with bated breath. The story centers around a young solicitor, Arthur Kipps (Paul Chapman) who writes a play in order to tell of the terrible events that he survived. The plot involves the solicitor who is summoned to Crythin Gifford, a small market town which is completely cut off from the mainland. The main character has to attend to the funeral of Mrs. Alice Drablow, an elderly widow who lived alone in Eel Marsh House. While situated at this solitary market town he encounters a mysterious woman in black who seems to haunt the whole town. He finds the 'woman in black' haunting the house he has to stay in, Eel Marsh house. He has to deal with the deceased woman's paper work and also encounters this mysterious woman in other areas of the town. Despite his questions, the locals refuse to help him and so Arthur must confront the sense of unease within the house and the appearances of the woman alone. Years on after the scarring event, Arthur Kipps asks a young Actor (Daniel Coonan) to help put on this play and describe the horrors he endured during his brief stay. There are only two actors through out the whole play, Paul Chapman and Daniel Coonan. ...read more.

The back stage scenery is very interesting because throughout the play it is behind a see through curtain it helps add to the spooky nature of the play. When at the cemetery the whole thing is covered in sheets to represent a deserted grave yard, also a large cross is projected on to the back curtain at the funeral. It also represents the house and the upstairs, adversity in the set is apparent all through out the play. At different points in the play the woman in black is used as an offstage convention, she randomly appears to heighten the audiences fear and build dramatic tension. In the cemetery scene the back stage that was shown would be dark radiating a sinister feel. Although when in a relaxed scene such as the house and office scene, the character uses the wooden box as something to place his feet on demonstrating his relaxation. Lighting is used well because it is used to differentiate between real life and the story that the two characters are acting in. The lights turn on and light up the stage to represent real life and dims when going into the story mode. Strobe lights are used to represent lightning which makes the weather change more realistic. When the woman in black appears the lighting is effectively used to only light her face, this is done well because it creates mystery as we don't see the woman's whole body just her deformed face. ...read more.

The woman in black has a distinct wardrobe which is obviously dressed in all black this makes her seem mysterious and spooky by the use of the dark shade, black. The overall impact that this play had on me was one that left me shaking out of fear, which was the aim of the play. The audience's reaction to this play was good, screams were hit on queue and the intrigued nature was apparent because of the involvement that they placed on the audience such as the woman in black approaching the audience. Many pinnacle moments come to mind when I think back. Sounds of screams are still fresh in my mind and the constant use of the creaking chair. The climax of the whole play is where the use of the horse tram crashing is used at the end of the play to leave the audience feeling surprised. By the end of the performance it fulfilled its aim to scare the audience I felt uneasy and the story felt believable because of the personal way in which the story was told, in first person. I would be able to remember this amazing play because of the clever way in which it was put together, limited amount of set and actors and still able to leave an impact on the audience. The use of screams and presence of the woman in black will leave a long term impact on me because of its effective use of the sound and well chosen times in which to present the woman in black on stage, this gave the audience a spooky impact. ?? ?? ?? ?? ...read more.

A well-structured personal response which uses some very good examples to support its points. Very good reference to many of the elements of drama and staging with these being linked on several occasions to their effect on the audience.

All the main background to the play and its origin is clearly outlined in the introduction.

The writer offers some details regarding the woman in black whilst avoiding spoilers which is also a commendable feature in the response. At times, particularly the first third, there is repetition and some points are confusing. The final two thirds of the response is extremely good and very clear in expression.

There is a need to proof-read in order to amend errors in spelling, punctuation and grammar and to improve the quality of communication.