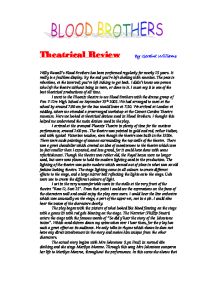 Theatrical Review By Geraint Williams Willy Russell's Blood Brothers has been performed regularly for nearly 15 years. It really is a faultless display. By the end you're left choking with emotion. The pace is relentless, at the interval; you're left itching to get back. I didn't know one person who left the theatre without being in tears, or close to it. I must say it is one of the best theatrical productions of all time. I went to the Phoenix theatre to see Blood Brothers with the drama group of Pen-Y-Dre High School on September 25th 2003. We had arranged to meet at the school by around 7:00 am for the bus would leave at 7:30. We arrived at London at midday, where we attended a prearranged workshop at the Covent Garden Theatre museum. Here we looked at theatrical devices used in Blood Brothers. I thought this helped me understand the main devices used in the play. I arrived at the cramped Phoenix Theatre in plenty of time for the matinee performance, around 2:00 pm. The theatre was painted in gold and red, rather Italian, and with typical Victorian touches, even though the theatre was built in the 1930s. There were nude paintings of women surrounding the top walls of the theatre. There was a great chandelier which created an idea of massiveness to the theatre which was in-fact smaller than I expected, and less grand, for it could have done with some refurbishment. ...read more.

This has a large effect on the story but suggests that the narrator is trying to show Mrs Lyons something or that he is has some involvement with Mrs Lyons, like the Devil. It is also shows one of the main themes of the play superstition. We can see this theme of superstition through The Narrators song 'Shoes Upon The Table'. Where things such as smashing a looking-glass, a full moon and spilling salt are all mentioned and are all symbolic of bad luck. When we see Linda (Louise Clayton), Mickey and Edward in the park we see them as stereotypical teenagers, dressed in school uniform and sexual feelings on their minds. Also when Mickey and Edward meet again they go to hug, but then stop and act as though they resent the fact this again is stereotypical of teenage boys. When we see Sammy (Daniel Taylor) on the bus he is dressed in leather, and very "punkish". This costume reflects the kind of clothing worn during the late 70s. Also we see the Bus Conductor (Alex Harland) as stereotypical through his body language and dialect. In the classroom we see even more stereotypes like the Nerd, Perkins (Louis Tamone) who jumps whenever a question is asked and his costume includes a large pare of glasses, also the teacher (Grant Aylward) ...read more.

The nurse turns out to be rather eccentric in character. In the play we see that 'Ave Maria' is played when the coffin is shown, which is typical of a catholic funeral. We also see that 'Tubular Bells' is played when the grave is dug up. This music was used in the exorcist who was released in the 70s, which also links in with the theme of anarchy. Inspector Meadows wears a red armband and the policeman who acts insane, are both symbolic of anarchy. This is to suggest that the police are corrupt and the director's note also quotes 'Anarchism is a game at which the police can beat you'. So it is obvious of what the director's intension was. After seeing both performances I can say that I like them both, but there can be very little comparison between them because they're both so very different. The only things that both have in common is the time period and the content of Catholicism, for LOOT uses 'Ave Maria' and Blood Brothers shows use of a rosary. Some of the differences are the content, the theme, the type of stage, the type of set etc, but most importantly the message at the end, Blood Brothers was to show that Blood is thicker than water, while LOOT had none because it was about anarchy and disorder. ...read more.