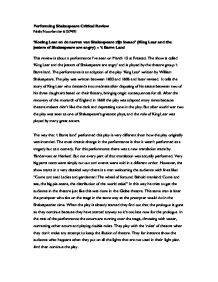 This review is about a performance Ive seen on March 15 at Frascati. The show is called King Lear and the jesters of Shakespeare are angry and is played by the theatre group t Barre land. The performance is an adaption of the

Performing Shakespeare Critical Review Niels Noorlander 6157491 'Koning Lear en de narren van Shakespeare zijn kwaad' (King Lear and the jesters of Shakespeare are angry) - 't Barre Land This review is about a performance I've seen on March 15 at Frascati. The show is called 'King Lear and the jesters of Shakespeare are angry' and is played by the theatre group 't Barre land. The performance is an adaption of the play 'King Lear' written by William Shakespeare. The play was written between 1603 and 1606 and later revised. It tells the story of King Lear who descends into madness after disposing of his estate between two of his three daughters based on their flattery, bringing tragic consequences for all. ...read more.

But not every part of that translation was actually performed. Very big parts texts were simply cut out and events were told in a different order. However, the show starts in a very classical way: there is a man welcoming the audience with lines like: "Come and see! Ladies and gentleman! The wheel of fortune! Behold mankind! Come and see, the big pie-scene, the distribution of the world cake!" In this way he tries to get the audience in the theatre just like this was done in the Globe theatre. This same man is later the prompter who sits on the stage in the same way as the prompter would do in the Shakespearian time. When the play is already started they find out that the prologue is gone so they continue because they have started anyway so it's too late now for the prologue. ...read more.

And then continue the play. The play is probably very hard to understand if you don't know the story already, because the actors are only telling the highlights and only refer to some parts. This play is the most drastic adaption of a Shakespeare play that I have ever seen. They only use very little original lines and also the design of the play is very far from how it would be in a classic performance. But they also bring back some classic elements that are not used anymore in modern theatre like the role of the prompter. And I like the way they play with these elements. And although I think that they went too far in not telling the complete story of the play, cause people who don't know the story also didn't understand it from only this performance, they did manage to perform this play in a very entertaining and fun way. ...read more.