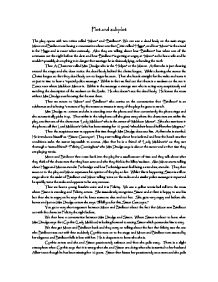 Plot and subplot The play opens with two critics called "Moon" and "Birdboot". We can see a dead body on the main stage. Moon and Birdboot are having a conversation about another Critic called "Higgs", and how "Moon" is the stand in for Higgs and is never taken seriously. Also they are talking about how "Birdboot" has taken one of the actresses out the night before the date and how "Birdboot" is getting at angry at "Moon" as he has a wife and he wouldn't possibly do anything to in danger that marriage he is obviously lying, or bending the truth. Then A Character called Mrs Drudge who is the "Helper" at the Manor. At first she is just cleaning around the stage and she does notice the dead body behind the chaise longue. Whilst cleaning she moves the Chaise longue so that they dead body can no longer be seen. Then she heads straight for the radio and turns it on just in time to hear a "special police message." Within in that we find out that there is a madman on the run in Essex near where Muldoon Manor is. ...read more.

At the end of the cards when Cynthia says: No! Simon, your luck's in tonight. Then Felicity replies by saying: "We shall see - the night is no over yet, Simon Gascoyne. Then Felicity leaves, leaving Magnus, Cynthia and Simon. Magnus is rejected my Cynthia as She wants to talk to Simon. So then Magnus leaves also threatening Simon. They start talking about how Cynthia thinks that Felicity knows something about them. Then she starts questioning him on him and Felicity. She also threatens him before leaving by saying the same thing as Felicity when she first saw Simon "I will kill you, Simon Gascoyne." This ends the scene on the main stage and we are left with Moon and Birdboot. Moon and Birdboot then seem to be in a world of their own and talking separate conversations and sometimes involving themselves in each others conversations. Then for a moment they actually talk about the play and their opinions of its progression. They end up arguing about their differing opinions though. The start of act 2 opens with a telephone ringing on the lights being brought on to reveal Cynthia, Magnus and Felicity. ...read more.

He recognises the body as Higgs (the other critic). Moon is shocked at the fact that he is dead or even that he is there. Birdboot is then shot. Moon now also enters the play. Instead of Moon and Birdboot in the critics' chairs it is now Simon and Hound. So Moon is now hound. Cynthia comes on stage and asks once again "Oh my God - what happened, Inspector?" Then Simon and Hound repeat the same lines as Moon and Birdboot did at the same point in this part of the play when Moon and Birdboot were the Critics. Magnus, Felicity and Mrs Drudge enter and gather around Moon. Moon starts to get confused when the other characters call Birdboot Simon and starts to get frustrated. Mrs Drudge then tells Moon about how she heard Cynthia and Felicity say that they were/wanted to kill Simon. Magnus reveals that he is the Real inspector hound. However, Moon recognises him as his stand-in Puckeridge. Then he works out the mystery. That Puckeridge killed Higgs, then Birdboot. Puckeridge then pulls out a gun and shoots Moon. He then reveals that he is Albert who is Cynthia's long lost Husband. The play is ended with Cynthia and Puckeridge holding one another and Moon saying: "Puckeridge, you cunning bastard." ?? ?? ?? ?? ...read more.