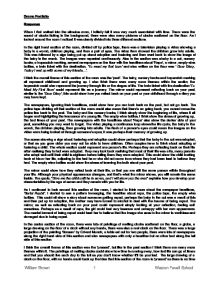 We had to create a tableaux image of the four strong words in the poem; love, hate, war and peace. The first

Drama Portfolio Response When I first walked into the stimulus room, I initially felt it was very much associated with time. There were the sound of clocks ticking in the background, there were also many pictures of clocks scattered on the floor. As I looked around the room I noticed it was clearly divided into three different sections. In the right hand section of the room, divided off by police tape, there was a television playing a video showing a baby in a womb, children playing, and then a pair of eyes. The video then showed the children grow into adults. This was followed by a sign being put up about adoption and fostering and then went back to show the image of the baby in the womb. The images were repeated continuously. Also in the section was a baby in a cot, nursery books, a hopscotch marking, several newspapers on the floor with the headlines about 'Rape', a mirror, empty wine bottles, a train ticket with the destination, 'To meet my first born' and also written on the floor was ' Dear Diary, Today I met up with some of my friends...'. I think the overall theme of this section of the room was the 'past'. The baby, nursery books and hopscotch marking all represent childhood and growing up. I also think there were many more themes within the section; the hopscotch could also represent the journey through life or the stages of life. The train ticket with the destination 'To Meet My First Born' could represent life as a journey. The mirror could represent reflecting back on your past, similar to the 'Dear Diary', this could show how you reflect back on your past or your childhood through a diary you may have kept. The newspapers, ignoring their headlines, could show how you can look back on the past, but not go back. ...read more.

I had been a better boss I held my head low to show how ashamed I was and spoke quietly and slowly. In the 'what if' flash back I was a very happy and considerate boss, welcoming his new idea with opening arms, I played this very kindly towards Eliot and always smiling. The conventions we used in this piece of drama were; slow and fast motion, freeze frame, flash back, mime and also used music at the beginning of the performance. We used fast motion to show every one carrying on with their lives around one focal character walking down the train. Fast motion is the opposite of slow motion where characters act faster than normal. We used the fast motion on the train scene with everyone else on the train apart from Eliot. This helped make Eliot stand out from the other characters. This symbolised that the world is still carrying on with their lives, no matter how terrible he is finding life. We then used a freeze frame when Eliot did the 'scream pose', this worked well as it showed the link to the painting we used as our stimulus. We then used slow motion and mime in the aftermath of the 'scream' pose and the reactions of the others on the train. Mime is where you act as normal but without speaking a word, but still moving your lips as if you were, we used this when Eliot is shouting and screaming at those on the train who eventually walk off. I think the performance looked more professional because the mime added more emotion and also symbolises the character in a way, he is shouting and screaming but the audience can't hear a word of it, just as many people ignored him in his life and never listened to anything he had to say. We then flashed back to Eliot's past to show why he felt so alone. ...read more.

It also introduced Eliot as a typical 'lad' which similarly shows how anyone could be a rapist. We could have improved this piece by making it easier to understand, maybe by making it slightly simpler. It was a very complicated story line and is difficult to show the life of the same person with two different people, which may have made it more complicated for the audience. The conventions we used in this piece were freeze frames, narration, thought tracking and cross cutting. They were all very effective in the way we used them. We used a freeze frame in nearly every scene, when a character clicked their fingers. This is where the characters had a chance to either narrate or we included thought tracking of the characters here. We used narration to introduce the characters, describe their personality and also inform the audience of what was happening through the story, we used the narration during a freeze frame. This was effective because the audience could not only listen to the narrator but see a still image on stage behind. The thought tracking, we included when we used a freeze frame, this portrayed the feelings and thoughts of the character to the audience at various parts of the story. We used cross cutting when we cut from one Katie's life to the other, this was a major part of the story, which helped show the two lives side by side. This was very effective as it could show the audience the different lives Katie would lead, if she had been raped and if she hadn't been raped. Other conventions we could have added into the piece would be maybe a flash back into the rapists' past. This could have given the performance more depth and perhaps reason as to why someone would end up doing such a thing, it would have explained to the audience what type of person ended up becoming a rapist. ?? ?? ?? ?? William Brown 1 Weston Favell School ...read more.