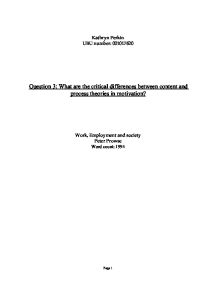 What are the critical differences between content and process theories in motivation?

Kathryn Perkin UBU number: 001017620 Question 3: What are the critical differences between content and process theories in motivation? Work, Employment and society Peter Prowse Word count: 1994 There are many different things which influence people's behaviour and performance. Different things motivate different people and affect how each person performs. There are many different theories on motivation, which have all been subject to criticism and findings which contradict the original theory. We need to look at what people feel and how they think in order to help predict their behaviour in given situations. To study motivation you need to examine the two main theories: Process and content theories. Content theory: Attempts to explain specific things, which motivate people in different situations. It is concerned with identifying people's needs and strengths. It looks at what motivates a person. Process theory: Attempts to identify relationships among variables which make up motivation. How it is initiated and sustained. It looks at the process of motivation. Content theories There are four main theories of motivation. -Maslow's hierarchy of needs model -Alderfer's modified need hierarchy model -Herzberg's two-factor theory -McClelland's achievement motivation theory Maslow's Hierarchy of needs model This theory was originally published in 1943 and examines individual development and motivation. ...read more.

Process Theories of motivation Process theories attempt to identify relationships between variables, which make up motivation. People want to see what actions are required to influence behavior. There are four main theories: -Expectancy based models -Equity theory -Goal Theory -Attribution theory Expectancy Theory People are influenced by what they expect to receive from their actions - the expectation of reward. Performance therefore depends on their expectations. There are three main theorists for expectancy theory. -Vroom -Porter and Lawler Vroom - He was looking at work motivation and found three key variables, valence, instrumentally and expectancy. His theory is that people prefer certain outcomes rather than others. Different things receive different valences. However the anticipated satisfaction is different from the actual outcome. He found differences between first and second level outcomes. First level outcomes are related towards performance whilst second level outcomes are related to needs. Tests however show little support for the model Porter and Lawler - They developed vroom's theory. They consider performance as a whole. They believe that effort does not lead to performance and so introduce rewards as variables. They see satisfaction and performance as separate variables and so attempt to explain relationships through this. ...read more.

The combination of these four factors allows for possible interpretations of a person's behaviour. Tests support this theory, however the theory does suggest that managers who use internal forces to control workers are more effective than managers who use external forces, and this is not always true. This all shows that content theory look at what motivates a person to do their work at their best performance and explains why different things motivated different people in different ways. It explains why people need to fulfil certain needs before others and how if managers used this knowledge, they could ensure a productive efficient workforce. This also shows that process theory is different because it examines how a person is motivated and what a manager needs to do to motivate a person. It looks at the relationship between effort and performance and how to examine a person's behaviour to see how best to motivate them. Using both of these theories will help ensure a productive, effective workforce, who are motivated to perform to the best of their abilities. However it is essential to always remember that what motivates one person might not motivate another person, and that what motivates a person at one point in time could change and become a de-motivator as their needs and desires change. ...read more.