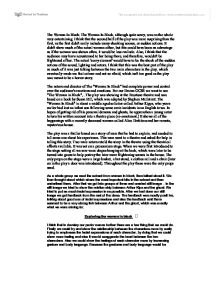 The Woman In Black. The Woman In Black, although quite scary, was on the whole very entertaining. I think that the second half of the play was more surprising than the first, as the first didn't really include many shocking scenes, or sudden actions. It didn't show much of the actual woman either, but this could have been an advantage as if the woman was shown often, it would be less realistic. Also, I think that the audience may have accustomed to her being there, and therefore, wouldn't be frightened of her. The actual 'scary element' would have to be the shock of the sudden actions of the sound, lighting and actors. I think that this was the best part of the play as much of it was just talking between the two main characters in the play, which eventually made me feel calmer and not so afraid, which isn't too good as the play was meant to be a horror story. ...read more.

The play was a thriller based on a story of man that he had to explain, and needed to tell some one about his experience. This man went to a theatre and asked for help in telling this story. Two male actors retold the story in the theatre using the theatrical effects available. It was set on a proscenium stage. When we were first introduced to the stage setting all we saw were drapes hanging at the back, which were later to be turned into gauze to help portray the later more frightening scenes in the house. The only props on the stage were a large basket, a hat stand, a clothes rail and a chair (later on in the play a door was introduced). Throughout the play these were the only props used. As a whole group we read the extract from woman in black, then talked about it. ...read more.

Also we could show the feelings of each character more by increasing gesture and body language. Because the gestures and body language would be increased then it would be a lot more obvious to the audience when each character was feeling because not only would there be facial expressions there would be the body language and more obvious gestures to back up the facial expressions so that everyone in the audience new what each character was feeling. Also if we wanted to develop our still image further we could use heights a levels even more. The ghost would have to be higher than Arthur Kips to show the power and also to show how the person lower down cannot do anything to the ghost and is completely in its power. ...read more.