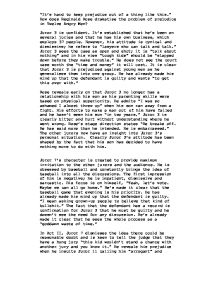 "It's hard to keep prejudice out of a thing like this." How does Reginald Rose dramatise the problem of prejudice in Twelve Angry Men? Juror 3 is confident. It's established that he's been on several juries and that he has his own business, which employs 37 people. However, his attitude is cynical and dismissive; he refers to "lawyers who can talk and talk." Juror 3 sees the case as open and shut; it is "talk about nothing" and in his view "tough kids" should be "slapped down before they make trouble." He does not see the court case worth the "time and money" it will cost. It is clear that Juror 3 is prejudiced against young men as he generalises them into one group. He has already made his mind up that the defendant is guilty and wants "to get this over with." ...read more.

The first impression of him is negative; he is impatient, dismissive and sarcastic. His focus is on himself, "Yeah, let's vote. Maybe we can all go home." He's made it clear that the baseball game that evening is his priority. He has already made his mind up that the defendant is guilty. "I mean asking grown-up people to believe that kind of bullshit." The fact that the defendant has a record is confirmation for Juror 3 that he must be guilty and he doesn't see the need for any discussion. He's already made it clear that he sees the whole process as a "goddamn waste of time." In Act II, Juror 7 dismisses the idea there could be reasonable doubt and is keen to tell the judge that they have a hung jury "this kid wouldn't stand a chance with another jury and you know it." ...read more.

Juror 4 bases his confidence on the defendant's guilt by logically going through the facts. He itemises them and concludes that "This is the charming and imaginative little fable the boy invented." However, his reliance on 'the facts' as he sees them is immediately undermined when Juror 8 produces an identical knife. Juror 4 is still convinced of the boy's guilt. His calm nature is ruffled when the 8th Juror applies the same pressure and relentless questioning, asking him the details of "the second feature" of the previous Monday night. "4th juror takes a handkerchief and wipes his suddenly sweating forehead." The 8th juror asks "and you weren't under an emotional, were you?" Juror 4's certainty of the defendant's guilt is still unshaken and he still puts his reliance on facts. The last fact being the woman eye-witness' unshakeable testimony." However, this is also demolished when he realises as a fellow eye-glass wearer that "no-one wears eye-glasses to bed." ...read more.