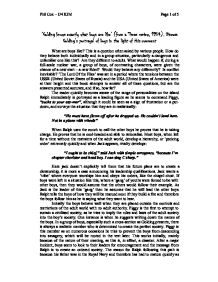 'Golding knows exactly what boys are like' (from a Times review, 1954). Discuss Golding's portrayal of boys in the light of this comment What are boys like? This is a question often asked by various people. How do they behave both individually and in a group situation, particularly a dangerous and unfamiliar one like this? Are they different to adults. What would happen if, during a full-scale nuclear war, a group of boys, of contrasting characters, were given the chance of a new start - a new Eden? Would they behave any differently? Is conflict inevitable? 'The Lord Of the Flies' was set in a period where the tensions between the USSR (United Soviet States of Russia) and the USA (United States of America) were at their height and this book attempts to answer all of these questions, but are the answers presented accurate, and if so, how far? The reader quickly becomes aware of the range of personalities on the island Ralph immediately is portrayed as a leading figure as he seems to command Piggy, "sucks to your ass-mar", although it could be seen as a sign of frustration or a put-down, and surveys the situation that they are in realistically: "He must have flown off after he dropped us. He couldn't land here. Not in a plane with wheels" When Ralph uses the conch to call the other boys he proves that he is taking charge. He proves that he is cool-headed and able to rationalise. Most boys, when left for a time without the restraints of the adult world, develop a hierarchy, or 'pecking order' extremely quickly and when Jack appears, rivalry develops: "I ought to be chief," said Jack with simple arrogance, "because I'm chapter chorister and head boy. ...read more.

Golding emphasises that everyone is different in their ideas and that people get on well with each other while they have their own way: "Even the smallest boys, unless fruit claimed them, brought little pieces of wood" This demonstrates unison for their leaders' ideas but they are also distracted by the fruit (their own intentions). Piggy cries for help in the, allegedly, as he would not be helped if this wasn't the case, "I got the conch...you let me speak!". As in any society there is a 'mother' figure. Ralph is the one with this calming presence upon the boys. The younger boys fear 'the beastie' and it takes Ralph's best efforts to calm them. There is always a fear that young boys have, and it is usually an exaggerated if not made up fear and they need to be calmed down. Ralph is unlike Piggy, both physically and mentally, as he recognises that the younger boys are a vital part of the 'tribe' and is not as pessimistic as Piggy is. The skills demonstrated by Ralph that prove that he is worthy of being a leader are that he has patience, for the young children, diplomacy, as he demonstrates when the issue of the snakes is raised, respecting public opinions, as he shows when he waits for the others to voice their opinions about the snake before voicing his own and he also demonstrates lateral thinking. Ralph has the support of the younger children and, for a short while, Jack. In most groups of boys there is a person like Ralph who is so practical that he is initially an idol, but he quickly descends into a memory of how life used to be when there is a leader whose main focus is having a good time. ...read more.

Ralph's first mistake was to trust in human nature and hope that Jack would comply with his ideologies, a fatal mistake, almost literally. Democracy is completely shattered when the ship is sighted and the pig is killed. The ship reminds the boys of their civilised lives which they once belonged to whereas the killing of the pig is an example of their descent from civilised behaviour into savagery. Ralph and Piggy have a greater concern for returning to a civilised society while Jack and the hunters enjoy the downfall of civilisation and the descent into savagery. The 'little-uns' show so signs of remorse at descending into savagery. It is my opinion that the story of 'The Lord Of The Flies' would be slightly different than it is today. Depending on what type of people that were put in the situation of being alone, free from the restraints of the adult world, there would be small differences. The boys would probably split into two groups more quickly, as there are rivalries between boys whilst within the restraints of the adult world. There would be less violence because people are more aware of others; vegetarianism is a recent train of thought. Other than these minor changes due to society evolving over a period of time, Golding's portrayal of boys is remarkably realistic, if one was to think for a moment, one could probably think of people in real life who are eerily similar to the main characters from Lord Of The Flies. The view that is particularly disturbing is that the behaviour that is exhibited by the boys is common to all human beings, young or old. ?? ?? ?? ?? Phil Cox - U4 KJM Page 1 of 2 ...read more.