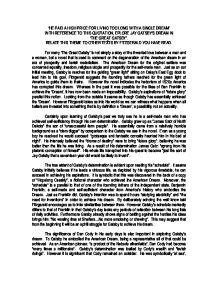 &amp;#145;He paid a high price for living too long with a single dream&amp;#146; with reference to this quotation, explore Jay Gatsby's dream in The Great Gatsby.

'HE PAID A HIGH PRICE FOR LIVING TOO LONG WITH A SINGLE DREAM' WITH REFERENCE TO THIS QUOTATION, EPLORE JAY GATSBY'S DREAM IN 'THE GREAT GATSBY'. RELATE THIS THEME TO OTHER TEXTS BY FITZGERALD YOU HAVE READ. For many 'The Great Gatsby' is not simply a story of the thwarted love between a man and a woman, but a novel that is used to comment on the degeneration of the American dream in an era of prosperity and lavish materialism. The American Dream for the original settlers was concerned equality, freedom, religious utopia and prosperity for the self-made man. Just as on our initial meeting, Gatsby is reaches for the guiding "green light" sitting on Daisy's East Egg dock to lead him to his goal, Fitzgerald suggests the founding fathers reached for the green light of America to guide them to theirs. However the novel indicates the hedonism of 1920s America has corrupted this dream. Whereas in the past it was possible for the likes of Ben Franklin to achieve the 'Dream', it has now been made an impossibility. Gatsby's aspirations of "future glory" parallel this notion. Looking from the outside it seems as though Gatsby has essentially achieved the 'Dream'. However Fitzgerald takes us into his world so we can witness what happens when all beliefs are invested into something that is by definition a 'Dream', a possibility not an actuality. Certainly upon learning of Gatsby's past we truly see he is a self-made man who has achieved self-sufficiency through his own determination. Gatsby grew up as "James Gatz of North Dakota" the son of "unsuccessful farm people". He essentially came from a relatively humble background as a "clam digger" by comparison to the Gatsby we see in the novel. Even as a young boy he resolved he would succeed: "grotesque and fantastic conceits haunted him in his bed at night". He intensely believed the "drums of destiny" were to bring "future glory", believing he was better than the life he was living. ...read more.

The idealized perfection that Gatsby instills in Daisy she perhaps neither deserves nor possesses. Upon meeting her again "His count of enchanted objects had diminished by one" indicating she is no longer a dream but within his grasp. Some may feel this comment also suggests in reality she is no longer "enchanted", Gatsby is becoming aware of the fact she is not in the high esteem he believed her to be. This notion is perhaps developed when Fitzgerald notes "There must have been moments that afternoon when Daisy tumbled short of his dreams". Gatsby cannot have Daisy in part as it is not Daisy he wants; rather, it is his representation of her. He has totally fantasized about what will happen and expects more from Daisy than what she can realistically give: "He wanted nothing less of Daisy than she should go to Tom and say: 'I never loved you'" however "romantic possibilities" are "totally absent from her world". We are aware even before Gatsby that his dreams for Daisy will fall short of reality as she lacks Gatsby's determination and resolution. She will never leave Tom and their baby, as she is too indecisive. We see she cannot decide what she will do in the next ten minutes let alone with regard to the rest of her life, as a result "she had never, all along, intended on doing anything". During the argument in the Plaza Hotel Gatsby's romantic idealism is truly splintered. In the face of Tom's pragmatism and the security his wealth brings "whatever intention" Daisy "had had, were definitely gone" all that remains is the "dead dream". Consequently without Daisy, Gatsby has not achieved the American Dream. Although Gatsby has attained the material wealth associated with it, to be the epitome of the dream he must have the status, getting Daisy symbolizes that to Gatsby. Gatsby will never achieve the type of social class Tom and Daisy possess. ...read more.

To realize the unworthiness of this aspiration is to realize his whole life has been meaningless. All he is left with is "what foul dust floated in the wake of dreams". Subsequently it is true to say "Gatsby paid a high price for living with a single dream". At any rate he paid a high price for becoming all consumed in a waking dream, confusing it for what is real. However he may reach for his dream of obtaining Daisy and all she symbolizes, but she will always remain a distant reality because it is not truly Daisy he reaches for, it is his representation of her. Gatsby has instilled Daisy with an idealistic perfection that she cannot possibly attain in reality and pursues her with such passion that he is blind to her limitations. The disintegration of Gatsby's dream of Daisy reveals the corruption that wealth causes and the unworthiness of its goal. Gatsby's dream is effectively used by Fitzgerald to illustrate his belief that the American Dream deteriorates as a result of the amoral pursuit of wealth in the 1920s. Whereas in the past it was possible for the likes of Ben Franklin to succeed, the easy money and relaxed social values of the era have corrupted the American Dream. This is symbolized in the final conclusion of the novel: "...the trees that had made way for Gatsby's house, had once panderdred in whispers to the last and greatest of all human dreams". The materialism and decadence of 1920s America that Gatsby and his faux town house represent have destroyed what "flowered once for Dutch sailors". Furthermore it has created an aristocracy of the 'old rich' whose elitism prevents anyone from truly attaining the Dream. Fitzgerald suggests that reaching for the American Dream is like reaching for "the green light, the orgastic future that year by year recedes us". Gatsby had complete aspirations of the impossible; effectively he was attempting "recreate the past...he did not know it was already behind him". ...read more.