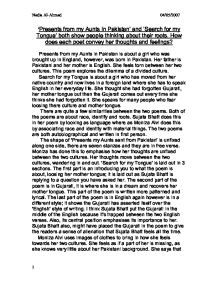 &amp;#145;Presents from my Aunts in Pakistan&amp;#146; and&amp;#145;Search for my Tongue&amp;#146; both show people thinking about their roots - How does each poet convey her thoughts and feelings?

'Presents from my Aunts in Pakistan' and 'Search for my Tongue' both show people thinking about their roots. How does each poet convey her thoughts and feelings? Presents from my Aunts in Pakistan is about a girl who was brought up in England, however, was born in Pakistan. Her father is Pakistani and her mother is English. She feels torn between her two cultures. This poem explores the dilemma of a divided culture. Search for my Tongue is about a girl who has moved from her native country and now lives in a foreign land where she has to speak English in her everyday life. She thought she had forgotten Gujarati, her mother tongue but then the Gujerati comes out every time she thinks she had forgotten it. She speaks for many people who fear loosing there culture and mother tongue. There are quite a few similarities between the two poems. ...read more.

Moniza Alvi uses images of clothes to bring in how she feels towards her two cultures. She feels as if a part of her is missing, as she knows very little about her Pakistani background. She says that the objects from Pakistan are exotic, colourful but on the other hand are very impractical. In a striking simile the writer suggests that the clothes showed her own lack of beauty "I could never be as lovely...as those clothes". She uses words such as glistening and embossed to emphasise the exotic, colourful nature of the clothes. You can tell Moniza Alvi thinks of the Pakistani clothes to be impractical as she says, "Candy-stripped glass bangles snapped, drew blood." She isn't used to the bangles so they appear strange to her. The bright colours suggest the clothes are burning 'I was aflame...I couldn't rise up out of its fire' a powerful metaphor for the discomfort felt by the poet who "longed...for denim and corduroy" plainer but comfortable and inconspicuous. ...read more.

Sujata Bhatt uses her language, Gujarati, to show how she feels towards her culture. Sujata Bhatt uses the metaphor/image of the bud and blossoming flower, as a way of representing the mother tongue re-emerging. Sujata Bhatt realises she can't forget Gujarati, as it is part of who she is at the end of the poem. She feels her identify is constantly changing, not frozen. It exists in layers. She celebrates that she has more than one culture at the end of the poem. Both of the poems are very similar, both involve the poet trying to find there identify and roots. Moniza Alvi's poem shows how torn she felt between her two cultures. Also how she was finding difficulty belonging anyway and felt like an outsider on both cultures. Sujata Bhatt's poem is about loosing your mother tongue and then regaining it. The two poems both use imagery, in different ways Moniza with clothes and Sujata with language, to put across their views and feelings about their identity. Nadia Al-Ahmad 04/05/2007 1 ...read more.