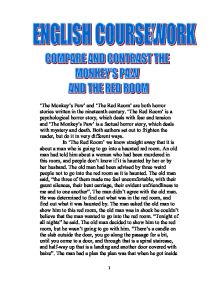 'The Monkey's Paw' and 'The Red Room' are both horror stories written in the nineteenth century. 'The Red Room' is a psychological horror story, which deals with fear and tension and 'The Monkey's Paw' is a factual horror story, which deals with mystery and death. Both authors set out to frighten the reader, but do it in very different ways. In 'The Red Room' we know straight away that it is about a man who is going to go into a haunted red room. An old man had told him about a woman who had been murdered in this room, and people don't know if it is haunted by her or by her husband. The old man had been advised by three weird people not to go into the red room as it is haunted. The old man said, "the three of them made me feel uncomfortable, with their gaunt silences, their bent carriage, their evident unfriendliness to me and to one another". The man didn't agree with the old man. He was determined to find out what was in the red room, and find out what it was haunted by. The man asked the old man to show him to this red room, the old man was in shock he couldn't believe that the man wanted to go into the red room. ...read more.

It was after midnight that the candle in the alcove suddenly went out. His first match would not strike, and as he succeeded with the second, something seemed to blink on the wall before him. The two candles on the little table by the fireplace were extinguished. The man walked across the room to the fireplace and relit one of the candles and suddenly it went out. All of a sudden candles started going out one at a time until the whole room was pitch dark. The man was now almost frantic with fear of the darkness and his self-possession deserted him. He bruised him self on the thigh against the table, he sent a chair headlong; he stumbled and fell and whisked the cloth from the table in his fall. The man made a run for the door, he couldn't remember anything else. The last paragraph of the story tells us that there is a ghost in that room which follows anyone who goes in there. The 'Monkey's Paw' is about a family, called White. The family weren't that well of, and were desperate for some money. A Sergeant Major had come to visit the family. ...read more.

Mr White knew it was his son, but he didn't answer the door, instead he used the last wish to wish his son dead. The reason why Mr White did this was because he thought that his son would come back the way he had died, and he had been in a grave for two weeks and would look very messy and dirty, and would scare the life out of Mrs White. I think 'The Red Room' is a very tense and spooky story. I think the man was very unwise to go into 'The Red Room'. His idea of lighting the room with candles failed, and he ended up hurting himself and feeling petrified. I think 'The Monkey's Paw' is a mysterious horror story. I think the white family were very unwise to make a wish as, they didn't listen to the sergeant's warning, and they paid the price. Their second wish for their son to come back to life was, a silly decision, because they should have just let him rest in peace. Their third wish was a wise decision, because he would have appeared the way he died. The thing, which makes me like 'The Monkey's Paw more than The Red Room', is that 'The Monkey's Paw' is more interesting and more mysterious. ?? ?? ?? ?? 1 ...read more.