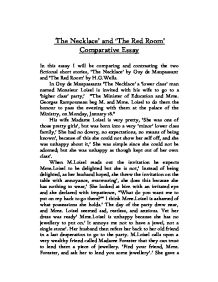 'The Necklace' and 'The Red Room' Comparative Essay In this essay I will be comparing and contrasting the two fictional short stories, 'The Necklace' by Guy de Maupassant and 'The Red Room' by H.G.Wells. In Guy de Maupassants 'The Necklace' a 'lower class' man named Monsieur Loisel is invited with his wife to go to a 'higher class' party,' "The Minister of Education and Mme. Georges Rampouneau beg M. and Mme. Loisel to do them the honour to pass the evening with them at the palace of the Ministry, on Monday, January 18." His wife Madame Loisel is very pretty, 'She was one of those pretty girls', but was born into a very 'minor' lower class family,' She had no dowry, no expectations, no means of being known', because of this she could not show her self off, and she was unhappy about it,' She was simple since she could not be adorned; but she was unhappy as though kept out of her own class'. ...read more.

The main character is 'Eight-and-twenty years' thinks he can conquer anything scary. The main character has come far just to conquer 'The Red Room'. 'The Red Room' has a very misty history, not much has been said about the room. The old people try to stop the man from going into the room but he does not listen and goes onto complete the mission that I think he has set himself, to find out what, if anything ghostly or scary is in the room. The author H.G.Wells has chosen to describe the characters in 'The Red Room' in detail. I say this because of the following,' second old man entered, more bent, more wrinkled, more aged even than the first', 'his eyes were covered by a shade, and his lower lip, half averted, hung pale and pink from his decaying yellow teeth'. He describes them to symbolise the ghostly theme. Both authors use many linguistic devices, including repetition and personification. ...read more.

The capitalisation of fear is used in both stories. In 'The Red Room' it is used in conjunction with repetition, 'There is fear in that room of hers - black fear, and there will be - so long as this house of sins endures'. This emphasises the final message that he has committed a sin to allow his fear to take over him. I think the moral message of the 'The Necklace is that we often place in due value on material possessions, which in the end we discover are worthless, to be envious to lie and deceive others is sinful and leaves one morally bankrupt and reflects Victorian values and that they should be punished for there sins. Where as 'The Red Room' reflects on Victorian values in the sense that superstition was frowned upon. The fact that the man actively seeks to investigate the supernatural and then allows he to lose all sense of rationality suggests he is responsible for his own downfall. To allow pride such power is a sin, which can be both damaging literally and metamorphically. ...read more.