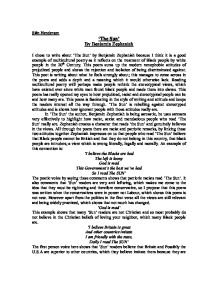 Si�n Henderson 'The Sun' By Benjamin Zephaniah I chose to write about 'The Sun' by Benjamin Zephaniah because I think it is a good example of multicultural poetry as it reflects on the treatment of Black people by white people in the 20th Century. This poem sums up the modern xenophobic attitudes of prejudiced people and shows the rejection and isolation of being discriminated against. This poet is writing about what he feels strongly about; this manages to come across in the poem and adds a depth and a meaning which it would otherwise lack. Reading multicultural poetry will perhaps make people rethink the stereotypical views, which have existed ever since white men found black people and made them into slaves. This poem has really opened my eyes to how prejudiced, racist and stereotypical people can be and how many are. This poem is fascinating in the style of writing and attitude and keeps the readers interest all the way through. 'The Sun' is rebelling against stereotyped attitudes and is shows how ignorant people with those attitudes really are. In 'The Sun' the author, Benjamin Zephaniah is being sarcastic, he uses sarcasm very effectively to highlight how racist, sexist and mendacious people who read 'The Sun' really are. ...read more.

'Sun' readers do not like foreigners, especially ones who betray their country, when it goes on to say that there are none it could mean that they think that no one would dare to betray Britain because it is so great, this is yet another link between racism and patriotism. When Zephaniah writes ' I love lies' I think it proves that he is being ironical and does not believe the views he writes, because no one would seriously admit that they love lies, by writing that he is saying 'The Sun' is full of lies and no one who believed in the views of 'The Sun' would write that. Zephaniah obviously dislikes the attitudes of 'The Sun' and shows it up through the idea of his 'Sun' reader. 'I really do love Princess Di' This defiantly proves that 'Sun' readers do not think for themselves because if they did they would realize that they cannot 'really love Princess Di' and be a racist because Princess Di did a lot of good charity work in 3rd world black countries helping Black people to have better lives and if 'Sun' readers really did love her then they would follow her example and help Blacks, not discriminate against them. ...read more.

These 'Sun' readers don't want to be stereotyped and discriminated against, but what they don't realize is that by taking the views that make them accepted by other 'Sun' readers is making them stereotyped as unintelligent bigots whose views are completely unacceptable by people who think important issues through thoroughly and come to a conclusion different 'The Sun's'. Ironically the readers of 'The Sun' are 'blinded by the Sun'. My conclusion is that 'The Sun' newspaper is a racist, sexist, semi-pornographic newspaper which uses women's bodies to lure impressionable males into the death trap which is the bigoted views written on it's pages. 'The Sun' doesn't care about minorities or even majorities such as women, just the powerful majority of people: Men! 'The Sun' fights to keep these people ignorant of worthwhile morals and values by using racism and sexism as sword and spear, patriotism as shield and pictures of women's bodies as reward. 'The Sun' is an evil that must be overcome, we must not let their poisonous swords and spears cut through us and make us fall, we should prove their weapons unable to penetrate the new generations of people, only then can Britain be more united and a better place. It is these points that I believe Benjamin Zephaniah is trying to put across to us in his poem 'The Sun'. ...read more.