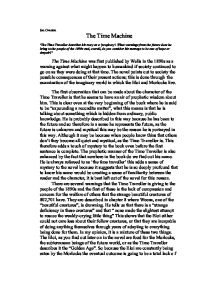 Jon Overton The Time Machine 'The Time Traveller describes his story as a 'prophecy'. What warnings from the future does he bring to the people of the 1890s and, overall, do you consider his message to be one of hope or despair?' The Time Machine was first published by Wells in the 1890s as a warning against what might happen to humankind if society continued to go on as they were doing at that time. The novel points out to society the possible consequences of their present actions; this is done through the examination of the imaginary world in which the Eloi and Morlocks live. The first observation that can be made about the character of the Time Traveller is that he seems to have an air of prophetic wisdom about him. This is clear even at the very beginning of the book where he is said to be "expounding a recondite matter", what this means is that he is talking about something which is hidden from ordinary, public knowledge. He is probably described in this way because he has been to the future and so therefore in a sense he represents the future, as the future is unknown and mystical this may be the reason he is portrayed in this way. Although it may be because when people know thins that others don't they become all quiet and mystical, as the Time Traveller is. ...read more.

This not only implies that are laid back, "ease", but also that they are deluding themselves to the truth that is to say they feel secure, but at the same time they must know of the immanent threat of the Morlocks below them, but most act as if it does not affect them or bother them the only parent exception being Weena. This is symbolic of the 1890's as the upper classes knew of the exploitation and poor conditions of the workers but seemed not to care about it, which leads me on to my next point of the Industrial Revolution. The Industrial Revolution was an influence on this book as it was happening at the time that Wells was writing. One of the main parallels that can be draw here between the novel and the industrial revolution is of the conditions in which the miners were forced to work. This is certainly visible in the novel, as the whole world of the Morlocks is the same as the conditions down in the pits. Wells tries to explain to society about these conditions by constantly writing about the "the thudding sound of the machinery" and describing the sound as "growing more oppressive". The idea of shoving ugly things underground is in the novel as well. This happened in the 1890's as society tried to hide most of the industry under the ground and out of site. ...read more.

To conclude, it is clear to see that the Time Traveller is keen to stress the similarities between 802,701 and the society of the 1890's and that the lack of compassion and the greed to exploit a fellow being is evident across the ages. He clearly means that if man had a little more compassion for each other then a lot of the problems in society would go away. The failure to consider your fellow man and people's willingness to live off him is symptomatic of a lack of compassion. The "mallow like" flowers, at the end, that Weena gives the Time Traveller are symbolic of this idea. He also warns society of what might happen if they continue as they are doing at the moment, they will degenerate to monsters that live off the Earth. The Morlocks and their canabbilistic activities can be seen as the beginning of this process. However the there is a silver lining to the cloud as it is made it quite clear, in the Epilogue, that the "future is black and blank" this is a reassuring thing to know as it says that we can change the future. On the whole I think that the Time Travellers message is one of despair for the people of 1890 as they cannot change what is happening, but to the people of the future it is one of hope as it says that we can change the future by just having a few more feelings for other people. ...read more.