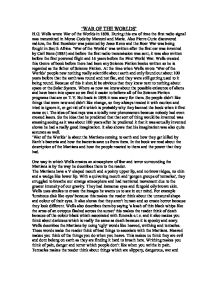 'WAR OF THE WORLDS' H.G. Wells wrote War of the Worlds in 1898. During this era of time the first radio signal was transmitted in Morse Code by Marconi and Marie. Also Pierre Curie discovered radium, the first Escalator was patented by Jesse Reno and the Boer War was being fought in South Africa. 'War of the Worlds' was written after the first car was invented by Carl Benz (1885) and before the first radio transmission was sent, it was also written before the first powered flight and 16 years before the First World War. Wells created this Genre of book before there had been any Science Fiction books written so he is regarded as the father of Science Fiction. At the time when Wells wrote 'War of the Worlds' people new nothing really scientific about earth and only found out about 100 years before that the earth was round and not flat, and they were still getting used to it being round. Because of this it should be obvious that they knew next to nothing about space or the Solar System. Where as now we know about the possible existence of aliens and have been into space so we find it easier to believe all of the Science Fiction programs that are on T.V. ...read more.

Tentacles makes the reader think about things which are slippery, dangerous, wet and ugly and most things which are slimy like snails, octopuses and slugs which people don't really like even then. Wells shows the reactions of the people in the book as being scared and frightened of what they were seeing. So they were frightened but they were also curious, as they have never seen any aliens or even space before. Where as we have and things change so often that we are used to it. But they were not because things didn't change as often. So they were terrified of what they saw of the aliens that they have never thought about before let alone seeing them in front of them. This is shown when Wells writes the part where he says 'I ran weeping silently as a child might do' and uses this to show that the aliens were frightening. It also shows that a responsible grown up person like a journalist was running away from them. Shows they are scary but the fact that he's weeping as well shows that they are terrifying. It also shows that they had mixed emotions about them but are so fascinated by them they still need to look at the Wells shows this where he writes 'I turned and running madly.... ...read more.

"What ugly brutes!"' and shows that the Martians were really ugly and that the readers saw them as ugly and mean as they had never seen any aliens before they did then. They had never seen science fiction before so it was new which by the way Wells wrote the story people then believed it was real when it was read on the radio. Because of this they started to evacuate the city when they heard it so they over reacted to the book also the book was banned because they saw it as a threat to them. In another line the book says 'in spite of their repulsive forms' which again shows they are frightening and is a believable story as he wrote the book so well. The fact that it was bacteria that killed the Martians and we couldn't shows they are not as infallible as they thought they were. It also shows that just as people had given up hope they were killed by bacteria which at the time very little was known about bacteria and had only just recently realised that bacteria existed and then it saved us from the Martians. He creates horror and fear by writing death as it shows you definitely can't escape their power and speed ...read more.