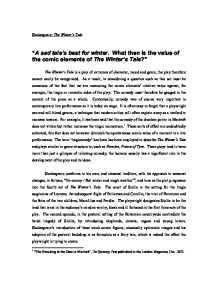 Shakespeare: The Winter's Tale "A sad tale's best for winter. What then is the value of the comic elements of The Winter's Tale?" The Winter's Tale is a play of extremes of character, mood and genre, the play therefore cannot easily be categorised. As a result, in considering a question such as this we must be conscious of the fact that we are measuring the comic elements' relative value against, for example, the tragic or romantic sides of the play. The comedy must therefore be gauged in the context of the piece as a whole. Contextually, comedy was of course very important in contemporary live performance as it is today on stage. It is often easy to forget that a playwright can and will blend genres, a technique that modern critics will often explain away as a method to increase tension. For example, it has been said that the comedy of the drunken porter in Macbeth does not vitiate but rather increases the tragic momentum.1 These sorts of effect are undoubtedly achieved; this fact does not however diminish the spontaneous comic value of a moment in a live performance. The term 'tragicomedy' has been has been employed to describe The Winter's Tale and plays similar in genre-structure to, such as Pericles, Prince of Tyre. These plays tend to have more than just a glimpse of relieving comedy; the humour usually has a significant role in the development of the play and its ideas. ...read more.

He is the instigator in making most of the fourth act extremely farcical, inducing misunderstanding and comedic situations predominantly for his own gain. Autolycus is essentially in control of his actions, a "snapper-up of unconsidered trifles" through being a man of many guises, from the grovelling "O, that ever I was born!" to the joyously satisfied "A merry heart goes all the day." The key to the comedy of his introductory scene, the clown's pick pocketing, is the speed of the dialogue, the spontaneity of the rogue's loosely constructed alibi, and the sense of classic dramatic irony that Shakespeare is not afraid to adopt, "You ha' done me a charitable office." When Autolycus describes the man who allegedly robbed him, comically, he describes himself, "that's the rogue that put me into this apparel." In winding-up the clown's opinions of this mystical 'Autolycus', the audience takes delight in this mockery of the fool, whilst also hearing the humorously exiting description of the rogue's life of short-term commitments in many "knavish professions". Beneath the obvious fact that Autolycus is a rogue, lies the essence of his mythical namesake, the god Mercury, not only god of theft and lying (Autolycus meaning "lone wolf") but also paradoxically of eloquence and presidency over the truths of hermetic philosophy. This is, of course, where Autolycus lives up to his roots; this is arguably where the humour's significance lies beyond just being a break from the tragedy. ...read more.

The penultimate act's gradual introduction to unconventional ideas allows us to laugh at them in comedy to prepare for Hermione's awakening, which, without the fourth act's careful preparation with humour, might seem funny when it is clearly not supposed to be. Comedy aids the play in its plot on a character level, on our understanding of the play's message and how the ending can plausibly come about. We must remember that Shakespeare is also catering for a live audience in his use of the humour but is also exploring the fabric of reconciliation and forgiveness. In my opinion, the major artifice or leap of faith cannot be taken seriously without the audience adopting what one could call a sense of humour, that is to say an open mind and an ability to mentally break convention. In order to have this ability to leave behind the pretence of the final scene of the play, an audience's mind has to have been nurtured by the comic elements in the fourth act. This nurturing leads to an admission on the audiences part that this play is a work of art and must be accepted and appreciated as just that. 1 "The Knocking at the Gate in Macbeth', De Quincey, first published in the London Magazine, Oct. 1823. 2 "As You Like It" Act II, Sc. 5, L. 7-8. ...read more.