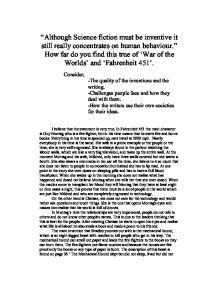 "Although Science fiction must be inventive it still really concentrates on human behaviour." How far do you find this true of 'War of the Worlds' and 'Fahrenheit 451'. Consider; -The quality of the inventions and the writing. -Challenges people face and how they deal with them. -How the writers use their own societies for their ideas. I believe that the statement is very true. In Fahrenheit 451 the main character is Guy Montag who is a fire fighter, but in his time means that he starts fire and burns books. Everything in his time is speeded up, cars travel at 2000 mph. Nearly everybody in his time is the same. His wife is a prime example or the people or the time, she is very self engrossed. She is always found in the parlour watching the labour walls, which are like a very big television, and takes up the entire wall. At the moment Montag and his wife, Mildred, only have three walls covered but she wants a fourth. She also wears a mini radio in her ear all the time, she listens to it so much that she does not listen to people in convocation but instead she has to lip read. At one point in the story she over doses on sleeping pills and has to have a full blood transfusion. ...read more.

The government decided that it was best to get rid of the books so that people would get less confused. 'The mind drinks less and less. Impatience. Highways full of people going somewhere, somewhere, somewhere, nowhere.' This just proves that the people of the time are not using their mind and this amount of usage has decreased over along period of time At the end of the book Beatty tries to get Montag to kill him but Montage does not. Maybe this is Beatty's realisation of the situation and that he has nothing to live for. The Mechanical hound attacks Montag because Montage has killed captain Beatty and has burnt down his house. Montag has to flee or be killed. He jumps into a river and floats off downstream and is washed ashore. He is greeted by a man called Granger who knows who Montag is because he has seen and followed Montag on his little television. Montag is introduced to fellow intellectuals who have all memorised a book for the people in he future to be able to call upon wisdom from. Montag then watches a random man get killed by the mechanical hound so that the police do not lose face with the public. This can also be taken as a metaphor for the death of the old Montag. ...read more.

As time goes on more and more Martians come and the world seems in great danger. In chapter 13 the now much stronger artilleryman and the narrator meet up with the curate, who is represented as the weak one of the trio. We now have three different types of people. The artilleryman who is strong and robust, the narrator who is taking it all in and is probably coming up with sum sort of plan and thirdly we have the weak one, the curate, he will give it all up if it was not for the other two. One of theses three types is what a normal person would fall into if they were faced with danger. I think this is what Wells is trying to say to us. The whole book is very much based on the actions and the feelings of humans if they are confronted with danger. The end of the story is probably the most well remembered end of a story from any book-the Martians are killed by simple bacteria; this may be one of the reasons why the book was so popular. It brings hope. Also the graphic scenes and the fact that it was so much before its time. I think this book inspired most comic books and many other stories after it, which shows the magnitude of this book. ...read more.